Oculus VR is trying to maintain its momentum in the virtual reality market, as Google showed off its Daydream headset and Sony inches closer to the release of PlayStation VR on October 13, and it revealed a lot of news today about how it plans to do that.

The Facebook VR subsidiary started its annual Oculus Connect developer conference today with a keynote presentation featuring several major announcements. The company talked about its upcoming motion controllers, the Oculus Touch, but it also revealed new technologies to lower the price for VR and impressive social tools. We’ve collected all of those tidbits for you and put them into one convenient location below.

For now, Oculus is sticking with its $600 Rift headset that it launched in March, but it gave the world a taste of what the future may hold in the form of a standalone headset prototype. Unlike the current generation of the company’s high-end hardware, the next-gen model Oculus is working on does not have wires and does not require external sensors to track position. Instead, the prototype uses a computer vision to map out your environment so that it can always calculate where you are in space. That’s a huge advancement, and it is the path to making full-fledged VR less expensive, more portable, and accessible to a wider audience.

Prototype of Oculus's next-gen inside out wireless VR headset. pic.twitter.com/c8enNx9OIq

Oculus’s next big product roll out is the Touch controller system that will enable Rift owners to bring their hands into VR. We now know that the device will ship in December with at $200 price.

Along with the controllers, Oculus is also planning several Touch-enabled games. Those include developer Epic’s Robo Recall and developer Ready at Dawn’s Lone Echo. GamesBeat went hands-on with many of these experiences if you want to hear how they play and what it’s like to use the Touch.

Facebook chief Mark Zuckerberg took the stage to reveal some of the social features that Oculus is working on, and he gave an impressive demo of a share multiplayer space. That led into the revelation that the company is bringing Avatars, Parties, and Rooms to Rift. Avatars enable you to build a 3D representation of yourself that others can see in Rooms that can hold up to eight people at once. Parties also enable you to group up and go from Rooms to games and back again.

Facebook doesn’t want to replace the web with virtual reality — it wants to complement that experience with its new CarmelVR browser for VR sites.

You can now get a VR-ready PC for only $500. That’s because Oculus was able to reduce the minimum requirements after inventing a new algorithm that halves the required framerate to create comfortable VR experiences. This tech, called asynchronous spacewarp, is a breakthrough that stitches together new frames using data from other frames. With spacewarp, a game can render 45 frames per second on a GPU, and then the algorithm can deliver another 45 frames per second almost with no extra burden on the video card or CPU.

The company also announced that it has worked with Nvidia and several hardware vendors to put its “Oculus-ready” stamp on multiple gaming laptops. The latest round of graphics chips in notebooks are powerful enough for the Rift, and this opens up VR to an entirely new audience.

The Rift already has built-in headphones, but the company revealed that it is selling $49 earbuds for an audio experience that blocks out sound for improved immersion. 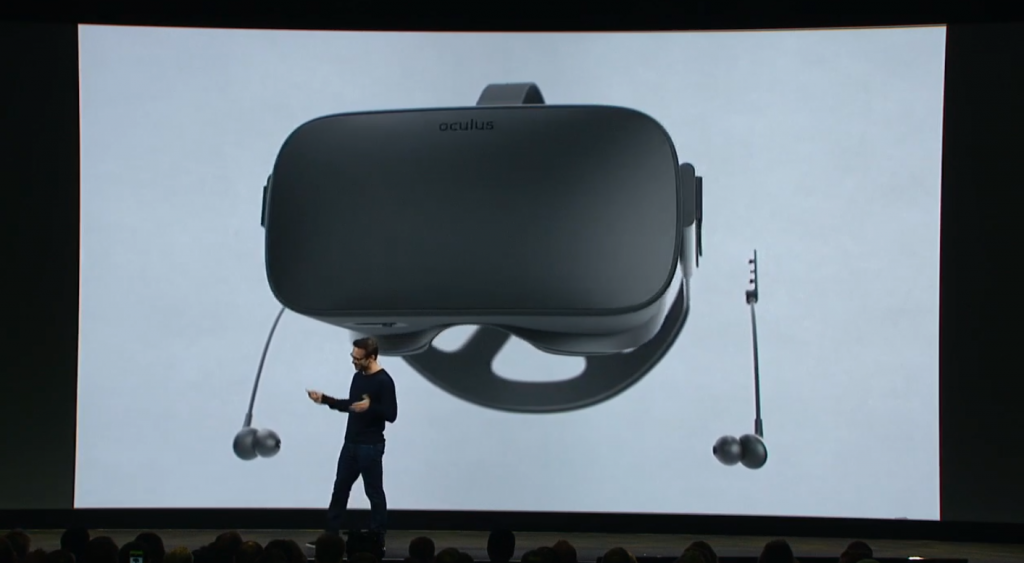 Oculus and Facebook have already put $250 million into funding games and experiences for VR. The companies announced that they will double that going forward. They revealed plans to invest $10 million in education, $10 million into diversity projects, and $50 million for mobile VR content.