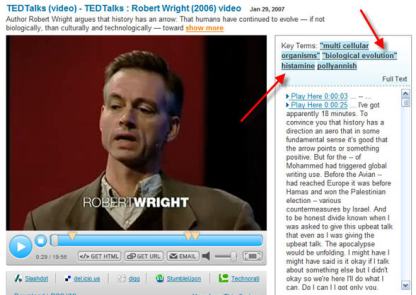 EveryZing, a company that has built technology to scan the text, audio and video in online TV programming to target you with relevant ads, has just scored a partnership with NBC. It now serves three out of the four major networks as customers.

It has also raised a $8.25 million round of funding from NBC’s investment arm, the GE/NBCU’s Peacock Equity Fund, as well as from existing investors, which include Fairhaven Capital, General Catalyst Partners, Accel Partners and BBN Technologies.

EveryZing uses speech recognition technology and natural language technology to scan audio and video. It picks out the words and topics being talked about, and then seeks to find relevant advertising to serve up to you.

By pulling out key words and subjects from video content, EveryZing also helps create a cloud of terms that are associated with any given piece of video. This lets search engines such as Google more easily associate the videos with terms, and thus helps the videos get found by people using those search engines. Along with it, of course, the content can be targeted by search advertising.

It competes with companies like Scanscout and Adap.tv. Notably Scanscout shares an investor, General Catalyst Partners. ScanScout last month brought in $5.1 million more of an anticipated $8.1 million third round of financing. Other backers include Time Warner, First Round Capital and Silicon Valley investor Ron Conway. Like EveryZing, it’s also based in Cambridge, Mass. Adap.tv raised $10 million two years ago, from Gemini and Redpoint.