Evolve Labs has unveiled a new BlackFlag esports service where you players can compete in League of Legends esports games for cash prizes.

The service is part of the growing esports market, which market researcher SuperData Research thinks could hit $1.9 billion by 2018 according. BlackFlag melds esports and skill-based gaming, where teams of five will pay a $5 entry to compete with other teams of similar skills for cash prizes. The company hopes that its mash-up of a wildly popular game and the cash prizes will create a lot of demand among esports fans who want to put real money on the line.

Minneapolis-based Evolve Labs is using the League of Legends tournament applications programming interface (API) to enable fair matches and honest outcomes. BlackFlag is offering a $5 bonus incentive to all new users signing up for the service. Other incentives can be used to fund matches or be redeemed for items, such as Riot Points, collectibles and apparel.

Evolve Labs already has more than 250,000 League of Legends players who play 750,000 matches each month. Now the company is going to enable those players to create ad hoc competitions. For now, this new service is a standalone product, but still affiliated with the Evolve collaboration platform, the company said. League of Legends players from Evolve’s 2 million users have been part of early testing and BlackFlag arenas will eventually be natively supported within Evolve.

“BlackFlag is a passion project of the Evolve team and something we have always wanted to do,” said Adam Sellke, the founder and CEO of Evolve Labs, in a statement. “Recently we participated in a series of AMAs where the idea was embraced by an audience of gamers expressing an overwhelming interest in a competitive gaming service. So, we fast-tracked the idea and turned it into a reality.”

League of Legends is a huge phenomenon as a pioneering in multiplayer online battle arena (MOBA) games. It has more than 67 million unique users who play over 30 million League of Legends matches every month.

Evolve Labs was founded in 2010 as a game-agnostic collaboration and productivity platform for gamers to connect, coordinate, and play online games with friends. It has more than 2 million members altogether.

The service might sound like gambling, but many states allow betting on skill-based games, where you can bet real money on a game of skill, rather than a random game such as a slot machine. 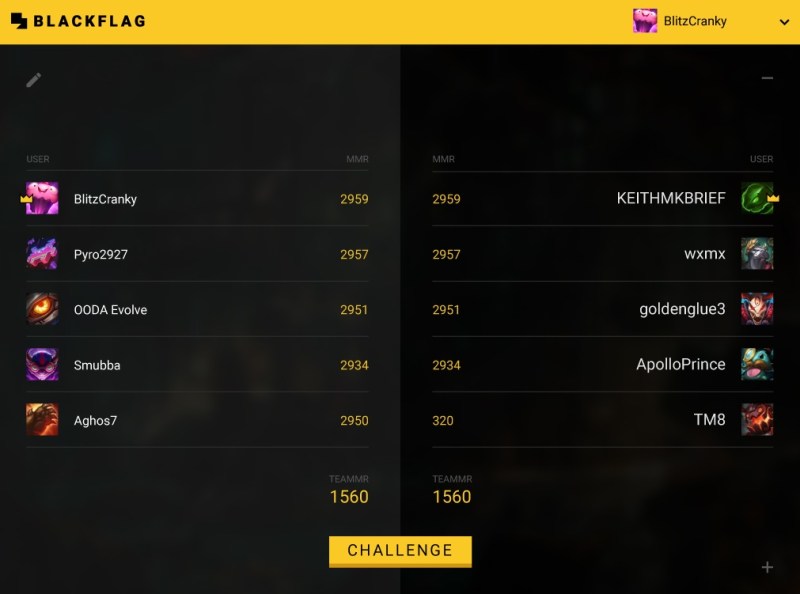