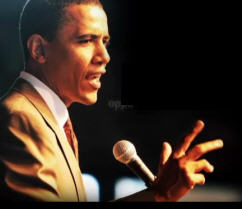 The campaign of Democratic presidential candidate Barack Obama has given VentureBeat an exclusive look at his technology plan, which he plans to unveil officially tomorrow (Wednesday) before a visit to Google’s headquarters.

The full plan can be seen below. It contains several new proposals, including the appointment of technology czar called a Chief Technology Officer.

The CTO’s mandate would be quite different from the Cybersecurity czar appointed under the Bush Administration. Bush’s czar helped defend against cyberattacks. Obama’s CTO, by contrast, would ensure government officials hold open meetings, broadcast live webcasts of those meetings, and use blogging software, wikis and open comments to communicate policies with Americans, according to the plan.

The plan extends Obama’s previous advocacy for more open decision making in government. It’s likely to play well here in Silicon Valley, because much of it relies on technology. The announcement is significant, too, because Obama comes to California seeking to bolster his standings here, where he currently trails frontrunner Sen. Hilary Clinton in most opinion polls. Nationally, Obama has come to a moment of truth in his campaign, a testing of whether he can cross the racial divide. Here in the valley, though, he’s right at home, where the local tech leaders and VCs have given him strong support (see our coverage here and here).

VentureBeat will be reaching to other campaigns over ensuing weeks, including those of Sen. Hillary Clinton and John Edwards, to discuss their policies on tech.

A copy of Obama’s new technology plans, which covers everything from providing new subsidies for internet broadband access, to increased permanent visas for immigrants, was given to VentureBeat Tuesday morning, and I was offered a chance to discuss it with several of Obama’s campaign managers. Here’s what I concluded: First, the plan represent the most comprehensive set of policies for open government I’ve seen.

He wants Cabinet officials, government executives and rulemaking agencies to hold meeting that are open to the public and transmitted with a live feed. The CTO’s mandate will be to ensure this happens. Specifically, Obama wants the public to be able to comment on the White House website for five days before legislation is signed.

Second, Obama makes new stances on several other areas of technology of interest to Silicon Valley’s tech community. He calls more aggressive government support of broadband access. Specifically, he calls for subsidies for phone carriers to be given to only those carriers offering both regular phone service and Internet broadband to rural areas. To date, carriers offering merely phone service have been able to claim subsidies from the so-called Universal Service Fund, giving them little incentive to roll out out broadband. This is also new, in that he hasn’t proposed this before.

Obama’s plan also calls for reviewing the decision by the Federal Communications Commission to open the wireless spectrum for competition. Specifically, Obama feels the FCC may not have gone far enough with its recent ruling. He is strongly considering advocating that spectrum on the 700 MHz band be opened so that third parties can lease it on a wholesale basis. This will ensure winners of a pending auction for the spectrum — expected to be large phone carriers like Verizon — don’t just sit on the spectrum and not use it. They may do that to avoid other entrants from competing with them. Obama’s campaign also appears ready to support the right of service providers to interconnect with a licensee’s wireless network. Google is expected to bid on the wireless spectrum.

Obama also is supporting network neutrality, a policy that would ensure Google wouldn’t be forced to pay an Internet service provider extra to ensure the speedy transfer of its data over the Internet. Stanford legal expert, Larry Lessig, called me up this afternoon (apparently under recommendation from the campaign) saying Obama has the most nicely balanced policy among the democrats. Obama’s plan, he says, imposes minimal regulatory burden. So: Unlike John Edwards who, proposes to “enforce net neutrality ensuring no degradation or blocking of access to websites,” Obama would not ban differential service. He would simply require that the terms offered one website or company are no better or worse than those offered anyone else. This is a kind of “most favored nations” network neutrality, much simpler to enforce than one that looks to technical factors to determine whether the regulation is obeyed. Venture people should be very interested in this, Lessig says, because “if network neutrality regulation is going to be passed (as it will if a Dem is president) this imposes a very minimal (and relatively easy to monitor) burden on network owner.”

Obama’s plan calls for a review of the H1-B visa program. First, the plan calls for ways increased training of Americans so that they can fill the technology jobs requiring a Bachelor’s degree — thus minimizing the demand by companies for immigrants to fill those jobs.

At the same time, Obama’ plan seeks to address another shortcoming of the H1-B program, which is that immigrants with short-term visas find it difficult to stay because of country-specific caps on permanent visas. A large number of short-term visa new arrivals are from China and India, but the country-specific cap on permanent visas means many Chinese and Indians are held in limbo for years. All the while, they’re unable to move freely between jobs — leaving them vulnerable to exploitation by employers.

On privacy, Obama will call for the creation of what he calls “Public Media 2.0.” While vague on details, campaign managers said Obama hopes to bring Tivo-like technologies so parents can ensure safe TV viewing. Obama also wants to raise sanctions against companies offering indecent – violent or sexually explicit – content.

Finally, Lessig pointed out another issue no one is talking about — though related to the issue of open government I talked about above. All sorts of amazing innovations like Maplight.org and Sunlightfoundation.com are building new tools to monitor government — to track influence, identify corruption, etc. They’ve all been hampered by the fact that government data (by design or accident) is impossibly difficult to get access to. Obama wants to make the raw data available: “So think about all the value that gets added to the free weather data given away by the government. This is the same idea in the context of data to make government more transparent, and less corrupt.”

Below is the plan (RSS readers will have to visit the site, since it is a Flash file).