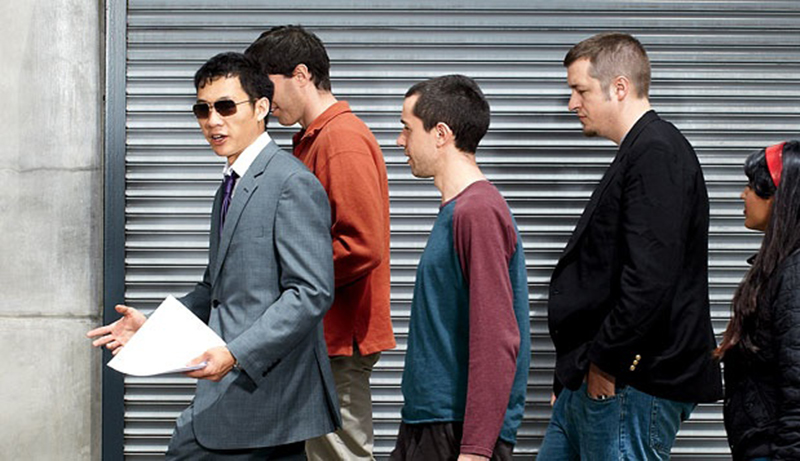 Today, Exec is busting out all over — all over the Internet with its pretty new web interface, and all over San Diego with its first non-San Francisco Bay Area expansion.

The redesign will emphasize Exec’s two main areas of focus: cleaning and errands.

“We want to make it really clear what it is,” said Exec CEO Justin Kan in an interview with VentureBeat. “It’s a lot brighter and more accessible,” he said, adding that the previous site’s design was too masculine and “in the way.”

“We want to convey that we want to help people save their time and make life simpler.”

Here’s a look at the new Exec:

The mind behind Exec’s new look is Karen Cheng, one of those rare startup Swiss Army knives who can seemingly do a little bit of everything: marketing, product, design, and beyond.

Kan hired Cheng from Microsoft last spring. “She’s one of my favorite hires,” he told us. “She wasn’t a designer; she was a product manager working on Excel.”

However, Cheng caught Kan’s eye with a product she built for a weekend hackathon. “[She] had this app that was called ‘520 or 90’ — they’re freeways in Seattle, and they’re both horribly congested. … She sent us an email, we saw that, and we thought her work was really awesome. She’s been meaning to do this big redesign, but she’s been working on the iPhone app, media, marketing emails. … She’s just super-creative.”

Case in point: this video she made when she resigned from Microsoft:

With the new U.I., Exec is beginning its expansion outside the Bay Area, starting with cleaning services in San Diego.

Why San Diego? we asked.

“The real story is, when I wrote the first version of all the code, it was in Pacific time,” said Kan. “We were gonna have to refactor all the code for all the other time zones, so we had to choose a West Coast city. … We were like, ‘Let’s pick somewhere that’s not too big, because it’s a test market. Can we manage this with no people on the ground?’ L.A. is too spread out; that left Seattle and San Diego, and [the Exec hiring team] just picked the place that was warmer.”

Exec will begin its marketing efforts in San Diego through good ol’ search engines. “It’s not the sexiest space, and it’s very saturated,” said Kan. “[But] we can be better as an online version for professionals — people don’t want to pick up a phone to do this stuff. You can go on the site, see when we’re available, get what you want, and pay online with a credit card.”

“You always have to have excellent quality,” Kan said, referring to Exec’s army of background-checked cleaners and assistants.

“We’ve built a lot around giving people feedback, telling them what clients are saying. We have a million dollars of insurance; I think as we increase our footprint, there’s an increased likelihood of something going wrong. But I don’t think it’s any more likely than that happening in San Francisco.”