Travel site Expedia released a bot for Skype today, and since it was made with the Microsoft Bot Framework, the bot will be converted to work with virtual assistant Cortana.

Last week, Microsoft announced the launch of the Cortana Skills Kit and software development kit to put the voice-enabled assistant in a range of devices. Expedia will be the first travel company to gain a Cortana skill, the company said.

Cortana entering the virtual assistant market with Siri, Alexa, and the like is a big deal, because unlike most of its competitors, the assistant is already used by 145 million people on personal computers.

The Skype bot can be used to book or cancel bookings for flights or hotels. Expedia will be the first travel bot on Skype with the ability to call a customer support agent.

“Should a traveler have an additional request that is not yet supported, Expedia will handoff the experience to an Expedia travel representative, or the traveler can call directly from within Skype for no charge,” the company said in a blog post. 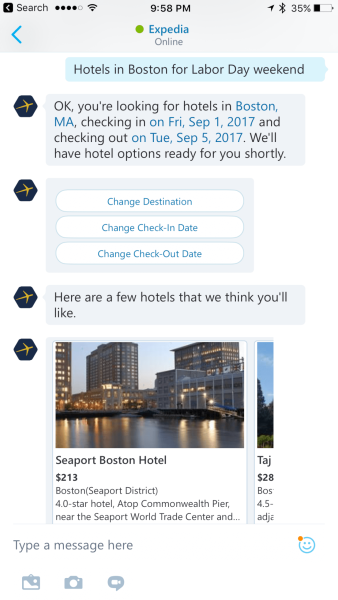 The Cortana skill will also be able to book flights. No date has been set for the release of an Expedia skill for Cortana, a company spokesperson told VentureBeat. The Cortana Skills Kit is now in private beta and will become available to more people in February 2017. The Expedia skill for Cortana will be the first voice-enabled bot from Expedia with the ability to purchase plane tickets, though like the Domino’s Pizza action for Google Assistant, the purchase will be based on past preferences.

Expedia’s venture into bots began in June with a Facebook Messenger bot for hotel bookings and continued with an Alexa skill for flight information last month.