Expensify, a startup that offers tools for expense reports that “don’t suck,” announced today that it’s now possible for companies to add a customized, branded version of Expensify to their own websites.

For example, Expensify used their new application programming interface (API) to build an Expensify application for Salesforce, so you can track your expenses through a CRM tool that you already use. That application is a finalist in the Salesforce Cloud Computing Challenge; the winner of the contest will be announced tomorrow.

Expensify crossed the VentureBeat radar in June 2009 with Matt Marshall reporting live from Alley Insider’s Startup 2009 Competition. Offering expense reports that “don’t suck”, the San Francisco, Calif.-based company lets you take a picture of a receipt with your iPhone and send it to your expense report. The iPhone application has steadily been improving in terms of ease-of-use. You can now type “I just spent $54 on shoes” into your iPhone, snap a picture, and send both items to your expense account. Another useful new feature is the ability to export to QuickBooks, bringing the “expense reports that don’t suck” ethos to finance departments sick of typing.

Here is a screenshot of the Expensify Salesforce application with an expensed receipt sent in via iPhone: 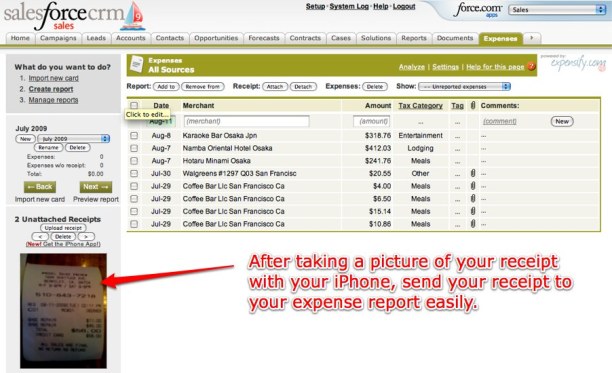 Expensify raised a seed round of $1 million in May 2009 through Hillsven Capital, Baseline Ventures, and Red Swoosh founder Travis Kalanick. Expensify team members include most of the original Red Swoosh team (acquired by Akamai) and have received Wall Street Journal coverage on the company’s working trips to countries like Thailand, Mexica, India, and most recently, Istanbul for a month.

“Offshoring is a pretty awesome way to gel the team and get focused while in remote, exotic lands. By isolating ourselves from daily local distractions, we can actually be *more* productive than at home, while simultaneously traveling the world and having a ton of fun. After all, the internet goes everywhere. Why shouldn’t we?” said Expensify iPhone developer Curtis Chambers.