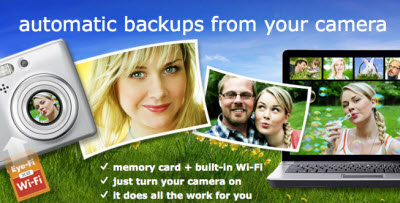 Eye-Fi had the smart idea of putting Wi-Fi wireless networking into photo memory cards, and it continues to run with it. Today, the company is announcing a new version of its image-uploading memory card.

The Eye-Fi Geo X2 will be sold exclusively at Apple Stores starting in May. It offers photo and video uploads that can transfer data at 802.11n speeds. You can upload photos and videos to 25 sites, including MobileMe, Picasa, Facebook and YouTube. Eye-Fi will automatically upload photos to Apple’s MobileMe or iPhoto for storing on a computer.

The Eye-Fi cards will also automatically tag photos with location data and work with iPhoto 09’s Places feature, enabling Mac users to easily browse, search and sort their photos on maps or by location name. The card also makes room automatically by deleting older photos once they have been uploaded. The 4-gigabyte cards sell for $69.99.

Mountain View, Calif.-based Eye-Fi is also adding user access to hundreds of thousands of new Wi-Fi hotspots to its network in a partnership with Devicescape. Those hotspots will start rolling out at the end of May. If you’re already paying for some kind of Wi-Fi service, you can participate. For instance, Boingo, BT Openzone, T-Mobile, SFR, Orange and Vodaphone subscribers can upload photos in the various hotspots.

Also, Eye-Fi users at schools and universities can now add their Wi-Fi network credentials to their Eye-Fi account. The company launched a PC version last month.