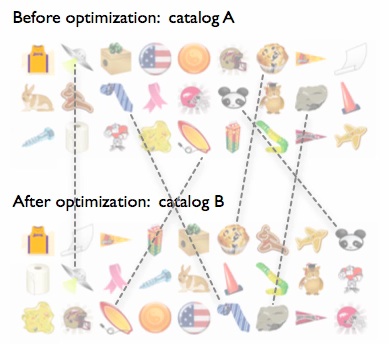 EyePredict is one of 53 companies chosen by VentureBeat to launch at the DEMO Spring 2011 event taking place this week. These companies do pay a fee to present, but our coverage of them remains objective.

If you’re selling something online, you probably don’t spend much time thinking about the actual layout of your catalog — and that’s a mistake, said Ran Carmi, founder and chief executive of a company called EyePredict.

There’s actually a complicated science to making products stand out on the page, Carmi said. That’s why EyePredict is launching a new product called EPflow, which rearranges product catalogs so that the most valuable products get the most clicks.

Catalogs are usually laid out in a pretty straightforward way, Carmi said. Companies put the most valuable item in the top left corner, and next to that they put the next-most important item, and so on. But location isn’t everything. As a simplified example, Carmi described a product catalog that’s just a grid of 20 Coke cans. The can on the top left isn’t going to stand out — but if you change all the other cans to Pepsi, that Coke can is suddenly very prominent, and it hasn’t moved at all.

With EPflow, you enter the address of the catalogs that you want to improve, and EyePredict will return optimized layouts for each one. (So you could optimize what shoppers see when they visit your front page, when they check out different sections of your store, and even when they enter common product searches.) In a test of the service, which you can see in the video below, EyePredict said that it increased clicks on the desired item by 162 percent.

EPflow can optimize pretty much any “commercial display,” Carmi said, but for now it’s focusing on catalogs of virtual goods and stock photos.

EyePredict has been funded through a number of grants, including one from the National Science Foundation. Carmi said he might consider raising venture funding in the future, but believes isn’t immediately necessary since the company is already cash-flow positive.