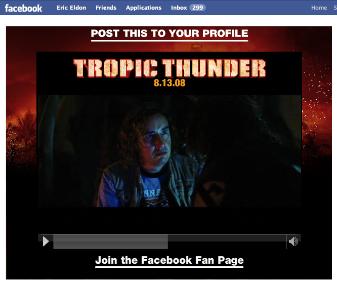 Facebook is rolling out a way to comment on ads that appear within the site, according to an interview with Tim Kendall, Facebook’s director of monetization, by Forrester analyst Jeremiah Owyang.

More generally, Facebook has increased the number of ad products that it’s experimenting with, as it works to make itself a multi-billion dollar business. Unlike last year, when the company launched the Beacon ad product after a stealthy buildup — then got slammed by the media — it is being more circumspect now, by briefing some bloggers beforehand.

The commenting idea is certainly different from Beacon, which showed you products your friends were interested in on other sites within its news feeds. But it also builds on the centrality of feeds within the site, something the recent site redesign and forthcoming iPhone also emphasize. Yesterday, the company separately said it plans to roll out a way for advertisers to pay for better performance of ads within news feeds. Already, an item with comments from friends is more likely to appear in your news feed.

Owyang also mentions advertiser-branded virtual gifts, and a way for friends’ actions on fan pages to be distributed in news feed, as well as contextually matched with other ads within the site. Added together, Facebook calls these two features, and the commenting feature, it’s “Engagement Ads.” Paramount Pictures tested out ad comments, via its Facebook video ads for the new movie Tropic Thunder a couple weeks ago, as Owyang notes.

But the latter two features are already available in similar form, as Nick O’Neill points out. As you can see in the screenshot below, one can already “engage” through comments on feed items generated by joining a fan page.

Still, I want to know what my friends think about Tropic Thunder, and their comments on an ad for the movie are a new way for me to find out.

Generally speaking, these engagement ads may be worth something. Virtual goods are already starting to make more money for third-party application developers; certainly, branded goods are an area for Facebook itself to promote more. Fan pages are another way for brands to get into the all-encompassing news feed.

Also, for third-party app developers (and the advertisers who use them), the company has also introduced a way for developers to target particular types of users based on age and location. “We plan to modify this policy to permit promotion of content around the sale of alcohol,” the company says.

Does this all add up to Facebook being worth billions of dollars? Not at the moment, but these do seem like relatively useful products and are less likely to stir up the press than Beacon. The most immediate problem is getting large advertisers to write large checks for ad campaigns that use these features. There’s no standard ad format for dialing up the presence of news feed ads, for example. That’s because rival social networks don’t even offer that option within their own of news feeds, as far as I know.

Besides Paramount, General Mills and Adidas both have plans to use Facebook’s new ad features later this month. In sum, this is another we-shall-see moment for social network monetization.