ComScore released a new study with Facebook today explaining “how social marketing works.” If that sounds to suspicious minds like the fox explaining how to guard the chickens, that’s because it pretty much is. However, the study does contain a huge amount of useful information for social marketers.

Here are some highlights. 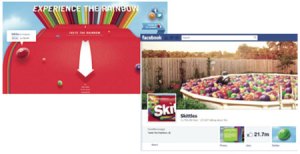 Social profiles on Facebook routinely get more attention than brands’ own websites. The example comScore gives is Skittles, which had 320,000 visitors to its Facebook page in March 2012, versus only 23,000 visitors to its corporate website. And that’s just visitors to the brand page; it does not count impressions of the company’s updates in fans’ news feeds.

Too many companies view the “like” as the goal. Rather, it’s a step on the path to either making a prospect a customer, or getting a current customer to buy even more. 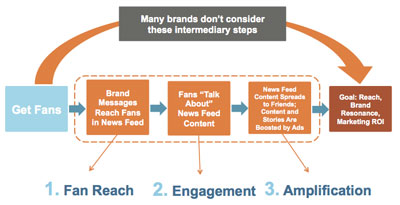 After someone becomes a fan, there’s work to be done: relevant, interesting messages from the brand that will actually show up in fans’ news feeds (fan reach), designed in such a way to invite comment and reaction (engagement), that will cause fan sharing and liking so the brand’s message reaches a wider audience (amplification).

All of that, comScore and Facebook suggest, will result in return on marketing investment.

Low engagement is a matter of perception

Even if only one percent of fans engage with a brands’ message on Facebook, that’s still a lot better than display ads around the web. In fact, it’s ten times better. The study cites recent numbers from DoubleClick suggesting that current banner ad click-through rates are around .1 percent.

In addition, the comScore suggests, because engagement on Facebook spreads the marketing message to many people while a banner ad, even when clicked on, is typically consumed only by one person, it’s even better than that.

The study recounts a experiment with Starbucks: following the in-store purchasing behavior of Starbucks’ Facebook fans. The fans were divided into two groups, those who were exposed to Starbucks’ message, and those who were not.

The fans who saw the messages? Visited Starbucks and purchased 38% more often than those who did not.

However, both were on extremely low bases of purchasing incidence. It’s not clear from the comScore study whether the targets were fans of the brand or just average Facebook users. But there was a lift, and partially as a result of these study results, comScore argues that click-through is not the only relevant measurement:

The ability to understand effectiveness as a result of exposure (i.e. view-through effectiveness) and independent of a user clicking on an ad offers critically important context for understanding marketing effectiveness.

Caution: This is not an unbiased study

As the study mentions, Facebook engagement rates have come under fire lately. GM pulled its advertising from Facebook, saying ads did not work on the social network. Now it is content to use the “earned media” component mentioned above to stay active with its Facebook fans.

While that is working for them now, the challenge is that the advertising ecosystem on Facebook is entirely controlled by Facebook. Which means if Facebook decides that more revenue is required, it could adjust the dials on what brand messages show up in users’ news feeds arbitrarily. And it can do so “in the interests of users,” even though Facebook would have a clear economic incentive, since brands will almost be forced to purchase access via advertising. While the popularity of a brands’ Facebook pages may outpace the company’s own websites, the amount of user time spent on brand pages pales compared to the amount of time spent in news feeds.

Which means as brands become more and more dependent on Facebook to reach their audience, they become locked in to a world in which they have no real control. I’m not suggesting that Facebook will abuse that situation. But the temptations will exist. And everything in this study that is good for brands, is also good for Facebook.

One final thought: a study that claims to authoritative on the question of “how social marketing works” should be broader than Facebook.

Image credit: Buy me via ShutterStock