On March 1, Brazilian federal police arrested Diego Dzodan for his failure to turn over decrypted WhatsApp messages to aid in a drug investigation. Dzodan is a vice president at Facebook, the parent company of WhatsApp, which offers its customers “end-to-end” encryption of their messages. Though Dzodan spent only about 24 hours in jail, his arrrest shows that foreign governments may take measures that are far more direct — and immediate — than those pursued by the FBI in its effort to force Apple to unlock an iPhone. 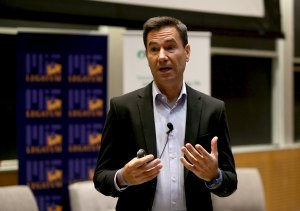 Above: Senior Facebook executive Diego Dzodan speaks at the Massachusetts Institute of Technology (MIT) in Cambridge, Mass., March 5, 2016. He was recently detained by Brazilian authorities due to a court order demanding data from the company’s WhatsApp messaging service for use in a confidential drug-trafficking investigation.

What if Facebook CEO Mark Zuckerberg had been in Brazil at the moment his company defied a court order? Might Brazilian law enforcement have jailed Zuckerberg instead of Dzodan? Sound far-fetched and alarmist? Maybe.

But how soon before employees of other technology companies find themselves ordered by local courts to unlock encrypted data from smartphones in criminal cases? What if there were a horrific shooting in a foreign capital, and law enforcement were stymied by iPhone data encryption? Would they swear an arrest warrant for Apple CEO Tim Cook? The international uproar would be swift, but probably divided.

In 2012, Fabio José Silva Coelho, president of Google Brazil, was arrested for failure to suppress videos posted to YouTube in which someone attacked a mayoral candidate . In 2010, three Google employees were arrested in Italy for a video that they had never even seen. These and other recent cases reveal differing, evolving approaches to privacy and security, and highlight opposing views on whether tech companies are innocent intermediaries or bad actors. These incidents also draw attention to our often clumsy understanding of technology and corporate structure. In the Dzodan case, for instance, the Brazilian court seemed to ignore the fact that Facebook and WhatsApp operate independently. They arrested the wrong guy! Underpinning these government actions however, is a desire — or a right, depending on one’s point of view — to have the ability to conduct searches, both virtual and real, in pursuit of safety and security.

Underlying this issue is a principle discussed by President Barack Obama this weekend at the South by Southwest conference:

Before smartphones were invented, and to this day, if there is probable cause to think that you have abducted a child, are engaging in a terrorist plot, or if you’re guilty of a serious crime, law enforcement can appear at your doorstep, say they have a warrant to search your home, and rifle through your underwear to see if there’s any evidence of wrongdoing.

The New York Times reported that there is a “prolonged standoff” underway between the U.S. government and WhatsApp, and described sealed litigation over encryption of messages much like the Dzodan case in Brazil.  Will it be the executive, judicial, or legislative branch that breaks the logjam and imposes the government’s will?

For now, the smart money favors Congress. It’s likely that legislation from Senators Richard Burr and Dianne Feinstein, the top Republican and Democrat on the Senate Intelligence Committee, respectively, will be introduced this week. The bill may require technology companies – including Apple and WhatsApp – to comply with court-ordered decryption, and may specify civil penalties for refusal to do so. The proposed law, however, would stop short of imposing criminal penalties. Whether foreign governments will go along with this approach remains to be seen.