Facebook has quietly clamped down on the growth of applications developed by third parties for its platform, shutting down two means for viral growth.

The company has done so because it fears that some applications are spamming users, and may turn them off.

Instead, it wants user’s “news feeds” to do the evangelizing. We’ll explain.

On June 26, the company announced that applications sending spam emails to users would be blocked. The offenders, hungry for more growth, were blasting emails out to users telling them that their friend “Joe has added [application x]”, and soliciting them to also add the application.

Earlier, on June 12, Facebook told developers that it was going to change how the invite process works. Formerly, users could invite up to 500 friends to an application per day; now, the number is limited to 10 per day.

Below, courtesy of Jesse Farmer of Appaholic, are charts of two applications that used emails to grow lightning-fast — until June 26th, that is: 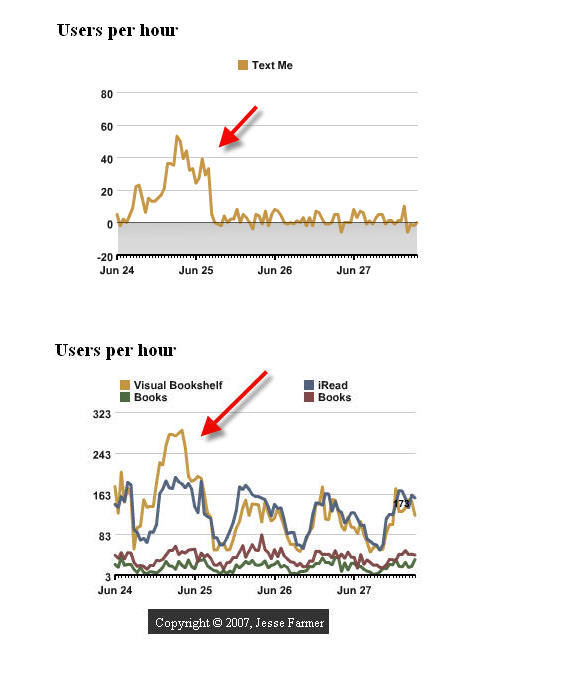 Facebook sees the healthiest driver of its growth coming from its “news feeds” feature — an automated digest where a user can see everything that their Facebook friends do on the site. There, users can browse what sort of applications are being adding (along with everything else their friends are doing on Facebook), but aren’t bombarded with requests.

Facebook spokeswoman Brandee Barker told us that the company limited invitations because they were was being misused by some developers “and Facebook users were complaining.” She said Facebook believes this will ensure growth for only those applications that provide “real value to users and don’t rely only on the invitation feature.”

In a rare moment, arch-rival widget-makers Slide and RockYou appear to agree: both that the changes were necessary, and that the news feeds matter most.

Slide (previous coverage here ) spokeswoman Tammy Nam told us the company has not seen a decline in the growth of their apps from the changes. She said that the real viral growth for Slide’s apps comes from the feeds. This way, she said, users can see what what their real friends are doing — drawing on their collective wisdom to make decisions about adding applications.

Notably, Facebook determines what to include in a user’s news feed by using an algorithm to sort through everything every friend does on the site and selecting what it considers the most “interesting.”

In an interview earlier this month, RockYou CEO Lance Tokuda noted that if Facebook does “a great job of tuning the algorithm [to show only what is most interesting], it may be possible to keep the viral cycle alive indefinitely.” He said the changes were “a positive addition.”

Google’s search algorithm ranks web pages according to how many other pages link to it: Its ecosystem of publishers and advertisers live and die by the rank their sites get. Facebook’s algorithm for news feeds will now likewise take center-stage: displaying the most genuinely popular applications while obscuring the others.

As we were writing this article, Valleywag posted with a negative interpretation of the decline in growth of Facebook applications — suggesting excitement around Facebook platform represents a bubble of application growth, all so much hype and no real value. The post near the end flips, however, and says “Facebook may yet prove itself to be the new internet.” From what we see, there has indeed been a bubble; Facebook is trying to burst it now with these changes. The real test will be in the next months, as more complex and useful applications are launched — and are forced through the news feed gauntlet.