Technology giants rely heavily on Wikipedia’s extensive database to source information for their platforms. So it’s only fair that they show interest in the long-term sustainability of the online encyclopedia. This week, Facebook made its support official.

The Wikimedia Foundation announced late Thursday that Facebook has contributed $1 million to Wikimedia Endowment, a fund to financially support the online encyclopedia and other Wikimedia projects. “We are grateful to Facebook for this support, and hope this marks the beginning of a long-term collaboration to support Wikipedia’s future,” Wikipedia founder Jimmy Wales said in a statement.

Founded in 2016, Wikimedia Endowment is designed to support the work that goes on at various Wikimedia projects, ensuring that it remains an independent endeavor. The foundation’s initial goal was to raise $100 million, and to date it has raised under $50 million.

“Through its nearly 18 years of existence, Wikipedia has become a trusted resource for hundreds of millions of people around the world. The Endowment ensures we can protect this incredible resource for knowledge seekers today, but also for generations to come,” said Lisa Gruwell, Wikimedia’s chief advancement officer. “We’re thrilled that Facebook is investing in the long-term future of Wikipedia and free knowledge for everyone.”

Facebook recently introduced a feature that uses Wikipedia’s database to give users more information about the source of an article in their News Feed. And for years Facebook has used Wikipedia to populate pages on its platform. 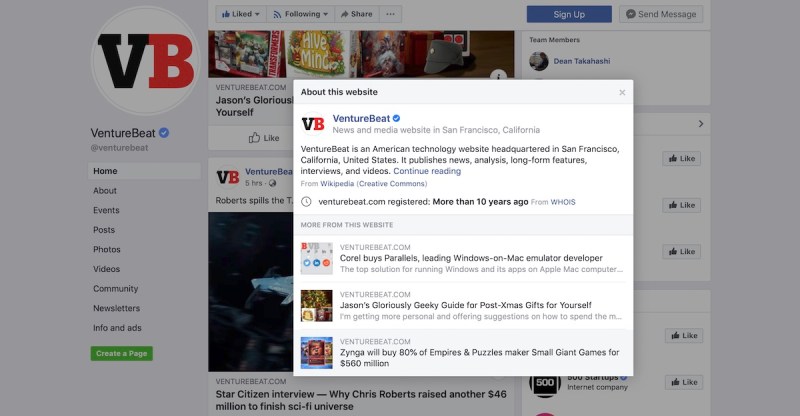 But tech companies have also been accused of taking Wikipedia for granted. This was evident as recently as March, when YouTube announced it would run a snippet of information sourced from Wikipedia under questionable videos on the platform in an attempt to fight the spread of false information. Not only did YouTube not offer Wikipedia any financial support, it did not give the organization a heads-up regarding what it touted as a partnership between the two. (Google has donated to the Wikimedia Foundation in the past and remains listed on the nonprofit’s benefactors page.)

In an opinion piece published in June on Wired, Wikimedia Foundation executive director Katherine Maher urged companies to better support the service. “As companies draw on Wikipedia for knowledge — and as a bulwark against bad information — we believe they too have an opportunity to be generous,” she wrote. “At Wikimedia, we already love and deeply appreciate the millions of people around the world who make generous charitable contributions because they believe in our values. But we also believe that we deserve lasting, commensurate support from the organisations that derive significant and sustained financial value from our work.”

To that end, Amazon, which relies on Wikipedia for information it serves via Alexa, announced in September that it was donating $1 million to the Endowment. Apple, Qualcomm, Salesforce, Adobe, and Netflix have also contributed to the Wikimedia Foundation via various in-house programs.

Update: VentureBeat updated this post with additional background about companies that have donated to the Wikimedia Foundation.