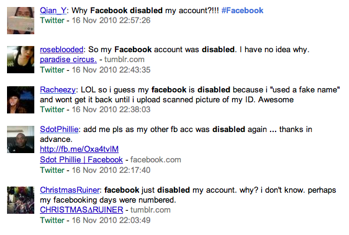 Thousands of female Facebook users started reporting on Twitter this morning that their Facebook accounts had been inexplicably disabled. Facebook confirmed the incident a little later, stating that the cause was a bug in the system and that it had been fixed, with affected user accounts being reactivated.

Users first started noticing the bug sometime around midnight (PST), using Twitter as a platform to share their annoyance. “My facebook account was disabled for reasons unclear. Liking a story on CNN? Sharing a link about Nicolas Cage? Serious crimes!,” wrote user raeracquel, characteristic of many others who were puzzled as to what behavior led to the incident.

After his wife’s account was affected by the bug, Kansas-based designer Brian Ford noticed that all users who were complaining seemed to be females or those associated with females. “Most of the accounts have been disabled for being “inauthentic”, and several people are reporting that they can only get it back by uploading a “government issued” photo ID. Sketchy,” Ford added.

A little later in the evening, Boy Genius Report received an acknowledgement of the bug from Facebook, with the following statement:

Earlier today, we discovered a bug in a system designed to detect and disable likely fake accounts. The bug, which was live for a short period of time, caused a very small percentage of Facebook accounts to be mistakenly disabled. Upon discovering the bug, we immediately worked to resolve it. It’s now been fixed, and we’re in the process of reactivating and notifying the people who were affected.

The company seems to have followed up on its promise, and users are beginning to see their accounts reactivated. Additionally, a scan through Twitter’s search for “facebook disabled” finds no new users complaining.

While the incident only affected a very small minority of users, it’s not a good sign that a social network most users rely on so heavily in their lives could be so easily affected by a trivial bug. If the incident wasn’t so widespread, it’s unclear how Facebook would have dealt with it. As Ford noted, “Facebook provides no way (to) actually contact someone, or submit a report about the issue.”