Facebook is launching a dashboard and toolkit for streamers and video makers so they can more easily manage their communities, including viewers who don’t follow the rules.

Facebook worked with the Fair Play Alliance, a coalition of game companies encouraging healthy communities in online gaming, and partnered directly with their executive steering committee to establish rules creators and moderators can use to set guidelines and help avoid disruptive comments.

Melonie Mac, an influencer with a million Facebook followers, has been using the tools for about a week.

“I think this has been really great for multiple reasons,” said Mac in an interview with GamesBeat. “Facebook is a lot newer in the gaming space. And it is such a massive platform, which is an awesome thing. And we’re able to reach so many people on Facebook, but there are a lot of people who watch streams now because of Facebook. And so they may not have been aware of proper etiquette.

“They see a girl streaming in their Facebook feed. I was getting a lot of problems. Some things that I didn’t want to see. Just very inappropriate comments about me as a woman and things like that and so having this new feature here and being a part of that is just made a huge difference for me.”

The partnership was established to ensure the company was representing the needs of the broader gaming community. Facebook is launching its toolkit with eight preset rules. The idea is that these rules will help promote inclusion and respect in communities and make people feel safe to express their voices.

These are the rules: 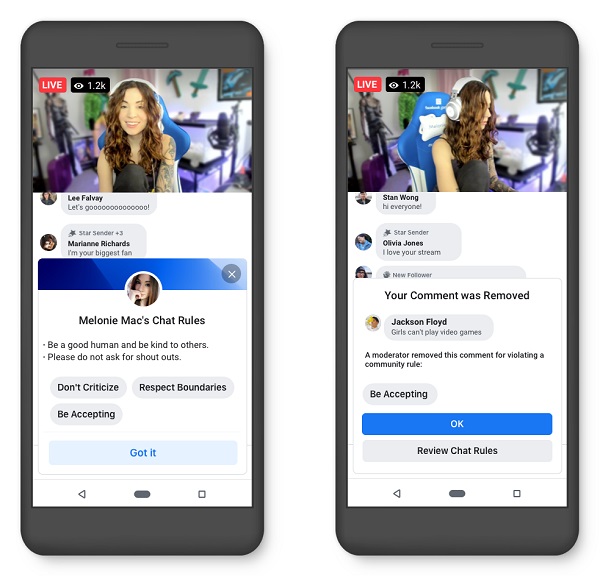 Don’t make advances or comments on appearance that might make someone uncomfortable.

We all have different styles—don’t judge someone’s gameplay or game choice.

Don’t intentionally provoke, threaten or insult anyone. We’re all here to have fun.

We’re not here for a sales pitch. Stay focused on the stream.

If it’s shocking, obscene, vulgar or inflammatory, leave it out.

Features of the toolkit include:

Facebook Gaming product manager Clara Siegel said in a statement that content creators come to Facebook to build positive and supportive communities around the games they love. The tools are aimed at fostering inclusive environments.

“While our Community Standards protect against the most egregious harms like hate speech and terrorism, sometimes all it takes is one person being rude, mean or simply disruptive to ruin a conversation for everyone,” Siegel said. “And what may be considered competitive banter in one streaming community, might be considered toxic in another. Gaming creators are tone setters, so that’s why we’re releasing a toolkit to help them set guidelines for positive conversations in their community.”

Creators will be able to access the toolkit rules through a Chat Rules button in the streamer dashboard. While creators often list chat rules in their Page description or at the bottom of a stream, the new toolkit makes rules more visible and gives creators a baseline of eight preset rules to start with.

Facebook will expand and update the rules based on feedback from creators and the way gaming community conversations evolve. Facebook has been testing the tools with a small group of creators like Mac, and it will roll them out globally in the coming months.

Mac’s followers can see right in the chat what the rules are. Mac has been streaming full-time since 2013, so she’s an old hand at this. But moderating has always been a hassle, and she hires people to do it for her. Her biggest problem is people joining her chat to flirt with her.

With the Facebook toolkit, you can see on the dashboard the different kinds of things that you that should be flagged to you, she said.

“Facebook has always talked to creators and asked what we’d want to see,” Mac said. “I’ve told them my problems that I’ve had with some comments. On the dashboard, I have the opportunity to add my own rules is great.”

Mac has moderators who govern her chat. The moderators can offer warnings for those who violate the rules or just ban the offenders outright, and the reason for the offense is made clear, automatically.

I asked Mac what kind of banhammer she carries.

She added, “I don’t like to be too quick to ban for things like that. But if somebody is deliberately saying something just very rude and they’re just there to be mean or just there to be disgusting, that’s just an automatic ban.”

The war against trolls might be unwinnable, but anything that makes getting rid of them easier is a good thing to Mac.

“Having these rules has made a difference in making people realize that, hey, you know, this is a friendly community,” she said. “We’re all like a big family here. We like to play games, have fun. And just everybody in chat becomes friends with each other. And so it’s not even just about me as a streamer. It’s about the entire community. And I think having those rules up there helps people realize that this is the mainstream. This isn’t the place to pick up a girl or anything. It’s a fun community.”