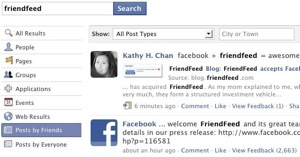 In discussing today’s news that Facebook is acquiring social sharing service FriendFeed, both companies have emphasized that the deal is more about talent than technology — which makes sense, because Facebook has been incorporating FriendFeed’s features for a while now. Here’s another FriendFeed-like addition: Facebook is rolling out a new search feature today.

With this feature, users can see every time a certain search term showed up in their news feed during the last 30 days. So, for example, I could see every time one of my Facebook connections mentioned a specific news story or an event. More significantly, I could search for “posts by everyone,” bringing up a view of the discussion across all of Facebook’s users (or rather, all the posts that users make public). That’s similar to what you could already do in FriendFeed or microblogging service Twitter, except that Facebook represents a much broader swath of the online population.

There’s been some speculation about whether Facebook is taking on Twitter or Google with the FriendFeed deal. At first, I thought that all seemed pretty far-fetched, but now I’m less certain. After all, Twitter’s recent homepage redesign emphasizes its search capabilities, and we, along with many other online pundits, have argued that search could be a way for Facebook to steal some of the buzz away from Twitter. At the very least, we can probably expect to see bloggers starting to use Facebook to sample public opinion (in a totally unscientific way) around a certain topic like we do with Twitter. I’m betting Google isn’t too worried yet, but if there is an eventual demand for the much-ballyhooed real-time search, Facebook will be in a good position to ride the wave.