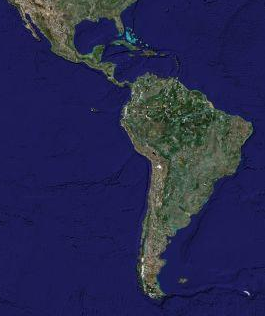 Facebook‘s growth has apparently slowed down in the US and the UK, the first countries where it grew big.

But it’s still growing around the world, passing 70 million worldwide monthly active users, according to the company’s official count.

In particular, the Palo Alto, Calif.-based company is newly popular in Latin America, where it has grown to six million now from four million monthly active users in late March, the company tells me. This may have something to do with Facebook’s translation application, where users have translated the text on the site into eight languages so far, starting with Spanish this past March (see screenshot, below).

Facebook is especially popular in Colombia, where it has two million users alone, and Chile. In Colombia, for example, Facebook has been used to organize protests against terrorist acts committed by FARC, the country’s left-wing guerilla army.

Aside: This is interesting, because right-wing paramilitary groups have also committed many terrorist acts, and aren’t being protested to the same degree on Facebook.

Facebook also counts Argentina, Colombia, Mexico and Venezuela among the thirty countries with the most Facebook users. My hunch is that Facebook’s American-college image goes down particularly well with pro-American Colombians and iconoclastic Chileans. The latter country, notably, has not adopted rival social network hi5, currently the largest social network in Spanish-speaking countries, to the degree that many of its neighbors have.

Aside from Google’s Orkut, which is big in Brazil, hi5 is the largest social network in the region. It has not been sitting idle as Facebook expands. Most notably, it has been working on a new but well-received effort to build its own developer platform, like rival Facebook’s.

How valuable is this hi5 platform? Will new applications for things like social games create more reasons for Latin American users to stay on hi5 versus move to Facebook? The stats look pretty good for hi5 so far. A little over half of its users have installed applications, even though the platform has only been fully available since the end of March. In total, applications are installed a million times per day and generate 6.5 million page views on application pages per day.

MySpace has already maintained its user base in the US, even as Facebook grew after it. Hi5 may turn out to be the MySpace of Spanish-speaking Latin America; some people will prefer Facebook, some won’t.