The data, which came from a sample of 200 of Brightcove’s media-company customers, shows how consumers are finding video. The most interesting takeaway: Facebook is rising fast as a source of traffic to videos. By the end of the year, it should be second only to Google in terms of video referral.

But it will be a distant second, and account for relatively little traffic in absolute terms. Most videos are found directly on a publisher’s website: Such direct traffic to videos accounted for 81.9 percent of views. Of third-party traffic — which accounts for less than a fifth of the total — 64 percent currently comes from Google, Yahoo! is in 2nd place with 11.9% while Facebook is at only 4.3 percent and Twitter, 1.2 percent.

One interesting result: Viewers who find video content from newspapers and magazines via Facebook also watch the video for a longer period of time than from almost any other source. That suggests that they might find videos recommended by friends more relevant than videos found through other sources. 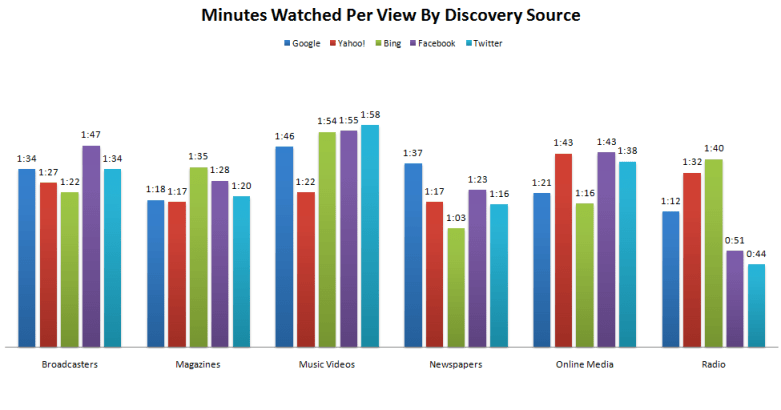 When it comes to marketing videos, consumers tend to be more engaged when watching the content on third-party sites like blogs and  social networks, watching nearly 30 seconds more on overage per video stream.  Traffic that originates from Facebook and Twitter leads to the longest viewing times for brand marketing video content. Video content directed via advertisements accounted for the shortest viewing times.

TV broadcasters remain the top destinations for online video, in spite of publishing fewer videos than other sites like newspapers. Users viewed 25 percent more broadcaster video streams in the second quarter than in the previous quarter. However, video viewing on newspaper sites surged by 65 percent in comparison to the previous quarter, mainly driven by interest in the Gulf oil disaster.

Consumers also watched more minutes per view on official media websites than on syndicated video sites, watching on average 3 minutes per view on TV network websites as opposed to 1:50 minutes on third party sites. By contrast, video viewing on music artist and label sites declined by 40 percent in the same period. Brightcove attributes this decline to the growing popularity of the Vevo music video portal.