Monthly active users hit almost 1.2 billion, and the number of people who check Facebook by mobile on a daily basis just crossed the half-billion mark. And for all those users, Facebook is recording ad revenue.

$2.016 billion of revenue for this quarter alone.

The lion’s share of that revenue is from the U.S. and Canada, where Facebook makes almost half its money — $962 million in Q3. Europe comes second, with $538 million, and Asia comes third, at $278 million. Everything else, including Africa and Oceania, is swept up into the social network’s catchall category, “rest of world,” and accounts for $238 million. 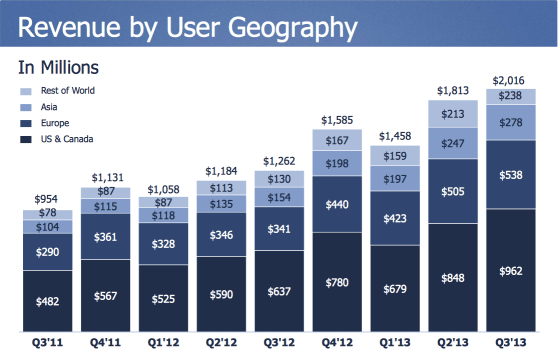 In every case, that’s up from last quarter — and the highest of any quarter in the company’s history.

But the increased revenue is not simply a matter of an increased number of users. Instead, Facebook is also growing ad revenue per user. The U.S and Canada is up most significantly, from $3.67 to $4.19 — a 14 percent increase. And Europe is up from $1.67 to $1.76, while Asia and the rest of the world are both up smaller amounts. 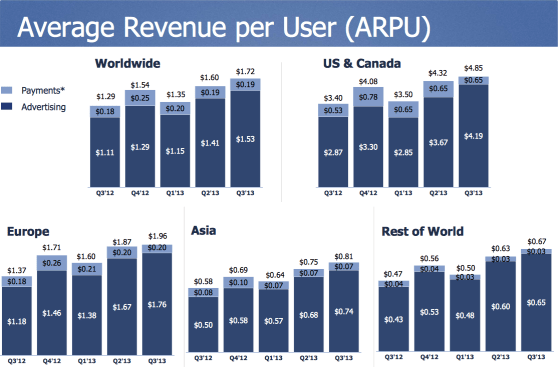 Thos are significant numbers in the space of just a quarter, and they speak to a tremendous acceleration in monetization by Facebook. And Instagram has yet to be really tapped at all.