Last year, around this time, I wrote about Facebook’s secret plan to kill Google and become the second trillion dollar company in the process. It generated lots of conversations. But I was wrong. Facebook’s plan is actually much bigger than that. This week, unless you’ve been playing Candy Crush Saga non-stop for 72 hours, you’ve probably seen some snippets of Mark Zuckerberg’s F8 keynote. You’ve also probably read lots of coverage on what has been announced.

What you haven’t read is what those announcements actually mean for you and for the world. So let me try to connect the dots. Before doing that, though, the usual disclaimer: I’m the cofounder and COO of AdEspresso, which is a Facebook Marketing Partner, and we do have privileged access to information not disclosed to the public yet, but what follows includes none of that. 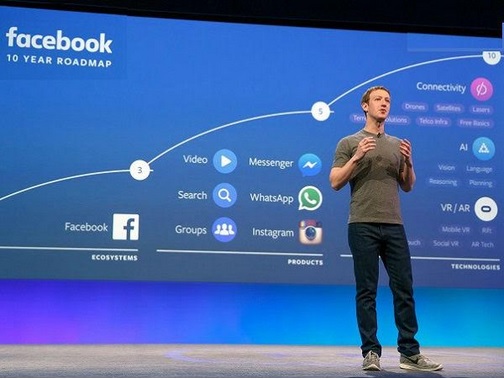 You’ve probably already seen the above slide. It’s particularly meaningful because it gives a peek into the long-term way of thinking of one of the most interesting companies of our generation. What’s even more exciting is that it clarifies the playbook Facebook has been using so far to win hands-down pretty much every relevant area. It’s a three-step play: 1) build the infrastructure, 2) build products on top of it, 3) build ecosystems around them. Boom.

Not Pinterest or Snapchat (each one just recently hit 100 million monthly active users). Not even Twitter (which claims around 800 million “unlogged” users and around 500 million “logged” ones). The huge untold consequence? The sum of the other big social networks does not match the reach of any of those single Facebook products. Let it sink in for a moment. That means that, unless there’s a fundamental change in human behavior (which, you know, has been unchanged for several centuries), Facebook has won the social race. 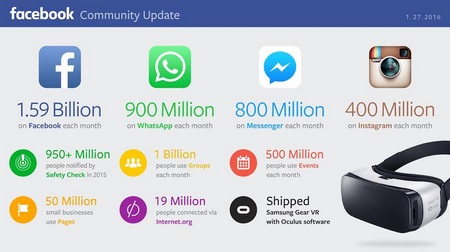 For anyone competing for share, it’s not good enough to be just “another use-case”, you need to have a reason why Facebook cannot go there too — because Facebook right now has the scale and the ambition, and the determination. If you can’t defend the new use-case, Facebook will just copy it. It happened with the implementation of “live videos” (which Meerkat/Periscope do) or the MSQRD acquisition for image/video personalization (which Snapchat does). Is it fair? No. But business is not about fair play, it’s about winning.

So the question for Facebook is not really how to prevent others from existing, not anymore. The question for Facebook is how to keep growing to further consolidate the scale that allows it to just implement and assimilate whatever new use-case will emerge. And the way to do that, when you have almost every connected human on earth excluding China, is, well, to connect more people and, once you’ve done that, to give them more things to do when they are connected. It’s the attention economy, baby.

Which is why you’re seeing Facebook talking about lasers and drones and planes and breakthrough 5G technology they’re willing to give away for the greater good. More connected people. Which is also why you’re seeing Facebook talking about virtual reality and instant articles and live video APIs. More things to do when people are connected. Because what some don’t yet realize is that, for a whole lot of people, Facebook is already the first touchpoint to the Internet as well as the last one, particularly when they are on mobile.

This is where things really become interesting. This is also where messaging comes into play. Sure, artificial intelligence and bots are fun and all, but the real goal there is to, once again, leverage the scale Facebook has to establish messaging as the easiest/fastest way to communicate, not just with other people anymore, but with algorithms and businesses too. Which usually you only want to do in two situations: a) when you want to buy something from them, b) when you’ve already bought something from them.

Are you starting to get the whole picture? Facebook is already generating billions of dollars by being an effective advertising channel, positioning itself as the only credible alternative to Google. By executing on this double strategy, Facebook is going to be in the position to become an effective E-commerce channel as well as an effective communication channel. In practice, it will cover the whole marketing funnel, sales and post-sales included. It’s gonna be a brave new world if Facebook can pull this off.

Efficiency, convenience, and speed are the strongest drivers when it comes to technology and behavior. For every magnitude of friction you remove, you create a magnitude more of adoption, and if Facebook can do it gracefully, it’s going to be powerful enough to be inevitable: a people-based web instead of an information-based one. It makes sense. While it seems like web pages have been around forever, the first web page was created on August 6, 1991. That’s not even 25 years ago. Think about that.

The web as we know it today may have been just an anomaly, the first iteration of something destined to take a completely different direction. In its place, a few years from now, we’ll have a private web instead of a public one. Sound scary? Maybe. But not necessarily. One thing I know for sure is it’s going to be interesting.