Facebook founder Mark Zuckerberg opened his F8 keynote event today with augmented reality, and he showed an example of what AR games would look like.

In the demo onstage in front of thousands at the F8 developer conference in San Jose, California, Zuckerberg showed a father and two children playing with a smartphone. They were holding the phone and tapping their hands on a physical table.

But on the screen, they were looking at a scene from a game that was overlaid on top of the real world. This demo was short and part of a larger talk on AR, which represents a strategic effort for Facebook over the next 10 years. Such games will help define whole new genres, Zuckerberg claimed.

The first version of the Facebook AR software platform is available in beta today.

He also showed apps outside AR, such as turning a home into a Harry Potter-style Hogwarts Caslte for a kid’s birthday, or seeing details on your screen of the Colosseum in Rome when you point your smartphone camera at the real thing. 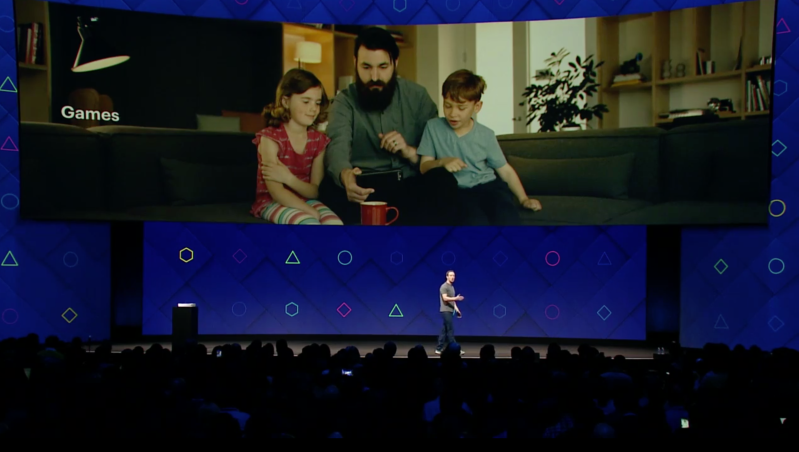 Above: Facebook’s demo of a family playing an AR game.

The tech depends on the ongoing revolution in computer vision, artificial intelligence, and a number of other technologies. Zuckerberg said that AR is a tech that can make both digital and physical reality better.

He also said that apps that turn people’s faces into cartoon animals and Pokémon Go are early examples of AR. But over time, Facebook’s goal is to deliver glasses that look like ordinary glasses but have AR built into them.

Among the things that Facebook is doing to help developers is releasing AR Studio, which they can use to handle chores like real-time face tracking and other tasks related to overlaying digital information on the real world. Electronic Arts used AR studio to make an engaging effect with its Mass Effect: Andromeda, a blockbuster role-playing game that came out last month, as a demo.

“I want to be clear and set expectations for this to develop,” he said. “Your experience is not going to change overnight. Over time I think this will be a really important technology that changes the way we use our phones and all of technology. I’m confident this is going to push augmented reality forward.”