It’s been a year since Facebook published its first diversity report, and not much has changed.

Though the company vowed to build a more diverse Facebook, that hasn’t happened yet. The company is now 68 percent men, down one percent from last year; and 55 percent white, down two percent from last year. The rest of the stats show similarly slow progress. For instance, Facebook grew the number of Asian people it employs by two percent; however, it failed to attract people of other racial backgrounds.

The number of women it employees in non-tech positions also grew. Women now occupy more than half of non-tech jobs at the social network. For some that marks anti-progress. Many organizations are trying to build more opportunities for women in engineering and programming rather than marketing and sales.

Women in tech positions at Facebook increased a dismal one percent, and the number of women in management positions hasn’t budged since last year.

The report is all promises for the future. Facebook says it’s instituted something akin to the NFL’s Rooney Rule, which requires that minorities are represented in each batch of qualified applicants for a new job. It’s also bulking up its Facebook University summer program, which takes kids from underrepresented backgrounds and pairs them with mentors within the company. Facebook has also allegedly overhauled its “Managing Bias” training course to be help its staffers be more aware of their unconscious biases.

While Facebook may be making all kinds of appeals for a more diverse future, the proof is in the numbers — and for now, Facebook doesn’t have them.

Check out the stats below: 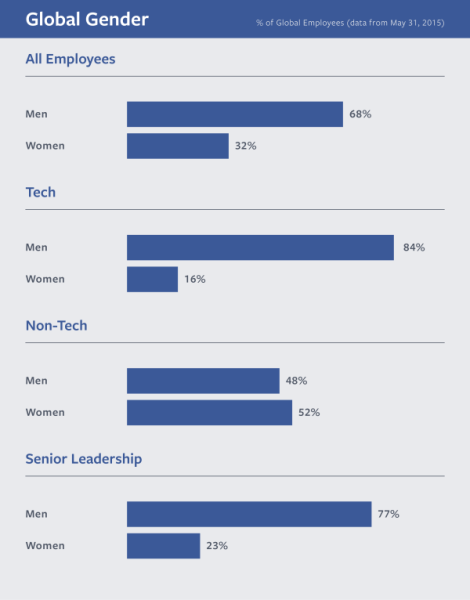