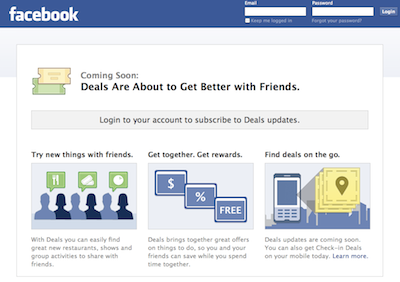 Facebook is kicking off its long-awaited Deals program to users in five major cities starting Tuesday with plans to expand in other cities soon after.

Facebook Deals, which will offer online discounts and deals from businesses to its users, marks the company’s entrance into what’s becoming a crowded group-buying deal market that already includes Groupon and LivingSocial.

Facebook will best competition from others by leveraging its massive user base and diverse social platform, the company told the New York Times.

As previously stated on the Facebook Deals landing page, the company is launching the program as a test in Atlanta, Austin, Dallas, San Diego and San Francisco. Users in those cities will get notified of special deals via e-mail and by using Facebook’s diverse communication options. So Deals will behave much like status updates and links that are shared between friends and acquaintances. And thus, Deals will appear in users’ news feeds and personal wall activities, which can be “liked” and shared with others.

While Groupon and LivingSocial may be good at putting together attractive daily deals from a variety of local businesses, their options for sharing those deals with a person’s social circle pale in comparison to what Facebook can do.

The deals themselves will come from two sources. Facebook will have its own sales force reaching out to local businesses, and it’s also partnering with smaller, more specific deal-offering companies, including OpenTable (restaurants & dinning),  PopSugar City (focused on offers appealing to women) and Zozi (activities and events).

The Deals launch will also be the first major push for Facebook’s virtual currency, Facebook Credits. Users will use credits to purchase offers from its Deals service.