Today Facebook is launching a new standalone app for exchanging photos with friends, called Moments. The app is available on both iOS and Android today.

The new app syncs to your phone’s camera roll and then uses facial recognition and location to group photos and help you share them with the right friends. You can sync with your friends’ Moments and they can sync with yours, so you have each other’s photos. 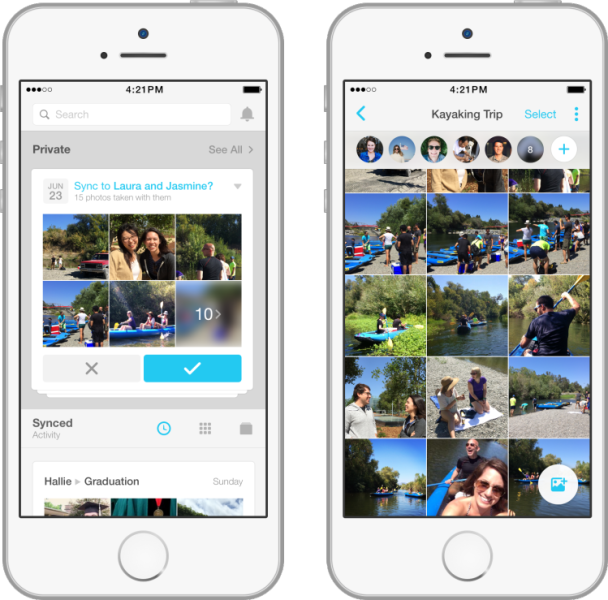 Rather than trawling various social media platforms for photos from that pool party you attended this weekend, Moments provides a one-stop spot for all photos from a given event.

The app is fresh out of Facebook’s Creative Labs, the same team that gave us apps like Slingshot (a Snapchat competitor) and Poke (a Yo competitor). Whether Moments will follow the same trend or become massively popular is yet to be seen. More important, perhaps, is that Moments showcases Facebook’s investment in artificial intelligence.

“Recognizing faces … is very, very difficult,” said Facebook artificial intelligence director Yann LeCun in a video describing the technology. What makes facial recognition so difficult from a computer intelligence perspective, he said, is that a single person can look different from photo to photo based on a variety of factors. Crafting software that can catch those nuances and find the right similarities takes lots of data — which Facebook has. The social network already uses facial recognition technology to make suggestions for tagging people in photos. But Moments puts this technology front and center. The life and death of Moments rests on its ability to correctly identify people.

And that could easily go awry, like it did for Microsoft’s meme-worthy facial recognition app how-old.net. Microsoft’s app was supposed to be able to scan a picture of your face and correctly determine your age. It was so inaccurate that it was laughable.

If Moments fails to connect the right people with the right photos, the app is likely to go the way of Poke and Slingshot.