Facebook has announced its new advertising program, a bold attempt at harnessing users’ behavior to serve them more relevant forms of advertising.

Advertisers will be able to buy pages on Facebook, then add their own photos, music, videos and third-party applications — similar to actions normal users can make on their Facebook pages. Users will be able to add advertisers as friends, making themselves “fans” of companies. Now, if you think this sounds somewhat strange, you’re not alone. It is. But Facebook is under pressure to make money, so its pushing the envelope on advertising practices. Stay with me, as I explain.

Advertisers will also be able to include a button, or “Beacon,” on their own sites. Users who click on these buttons will effectively share the advertising information with their friends on Facebook, via their activity feeds. Again, this sounds far-fetched as a successful advertising strategy, no mistaking it.

We wrote about the gist of this announcement last Friday.

Just like with your friends, when you add a company as a friend, write in its wall, upload photos or use a third party application on the page, these actions may be displayed in your news feed and mini-feed (what exactly is shared is part of Facebook’s secretive algorithm), as well as in the news feed of your friends. Information from Beacon will appear in your news feeds.

Facebook’s ad system will also run what it is calling SocialAds, which take social actions from your friends — such as a movie rental — and combine that information with an advertiser’s message to display the most “relevant” ads to you. These ads could appear in your news feeds or on the left-hand column as banner or flyer ads. This is where things get interesting. These ads don’t depend on you taking the preposterous action of “befriending” an advertiser. They are triggered after you take a mere action (renting a video). The risk, however, is that users will bristle when they get hit with such ads. Marketing partners include Facebook-backer Microsoft, Coca-Cola, CBS Corp. and others.

However, testing shows that SocialAds are getting double the clickthrough rate of Facebook’s previous banner ads, Forrester Research analyst Jeremiah Owyang tells us. Check out Forrester’s analysis here for more. Owyang argues these ads could be a new way to tap into word-of-mouth marketing — peers trust each other the most (see below). 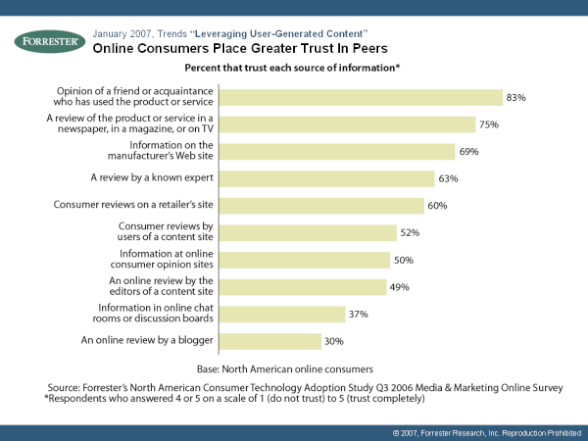 Facebook will also offer an interface for marketers which tracks ad performance, demographic information about fans, activity on the pages and trends.

Third-party applications will enable actions on these pages, such as booking flight reservations or buying a song. More than 100,000 advertiser pages will launch today, the company says.

While we have heard grumbling from among third-party developers about Facebook developing its own applications for these advertiser pages, Facebook says that it is working with some outside developers. Companies with existing applications to be tailored to advertiser pages include Fandango, iLike, Musictoday LLC, OpenTable, SeamlessWeb, Zagat Survey LLC and Zazzle.

This ad system is part of a major Facebook growth strategy to create a virtuous cycle rewarding businesses for promoting themselves on Facebook and in turn causing millions of more users to join Facebook.

The big question remains: How interested are users in sharing their actions from a business’ website with their friends? For partner Blockbuster, users may possibly want to share what movies they are renting by using Beacon. But they can share that information in other ways? Why would they choose the Beacon?

Getting users comfortable with sharing e-commerce transactions sets up a virtuous cycle: (1) E-commerce stores can easily track the financial return of promoting Facebook, based on how many users share their purchase information, and how many sales are generated off clicks from friends reacting to it; and (2) the more financial rewarding Facebook is for e-commerce sites, the more those sites will attempt to promote it, say in promotions in confirmation emais. This, in turn, would lead to more users seeing the promotions, taking actions, and spurring still more activity from their friends (and faster Facebook will grow.) That would be Facebook’s hope.

Where does this leave Facebook? Aggregating millions of users’ transaction information is obviously valuable and could potentially be used to enhance ad targeting. Despite our skepticism, Facebook does have a legitimate shot at creating a virtuous cycle valued by users and businesses that, once set in motion, could over time simultaneously cause Facebook to grow significantly, give Facebook the clearest picture of an individual’s purchase history short of having a download track a user’s every purchase and provide better data to support enhanced targeting of SocialAds, in the process making more money.
Doug Sherrets contributed to this article. [Disclosure: Doug Sherrets owns a small number of Facebook shares.]