A new Facebook redesign internally referred to as FB5 launched today for users in the United States, the culmination of hundreds of details that CEO Mark Zuckerberg said adds up to “the biggest change to the app and website in the last five years.”

The new Facebook app launch coincided with several news stories shared at the F8 developer conference, like WhatsApp video calls for Portal, the new Oculus Quest, and a redesign of Workplace by Facebook, a workplace communications app that competes with Microsoft Teams and Slack.

The Stories format, where content is visible only to friends and disappears in 24 hours, became popular on Snapchat but has since come to Facebook, Instagram, Facebook Messenger, and WhatsApp. In roughly two years or less, each surpassed Snapchat and now commands hundreds of millions of daily users. Stories were made more prominent in the new Facebook app, and today Zuckerberg said Stories are core to the future of a more private and ephemeral social experience on Facebook.

Stories from Instagram will soon be visible to Facebook Messenger users, and with the unification of Facebook’s messaging products there’s a good chance Stories will someday be visible on Portal. But the feature is not yet ready for the enterprise, Workplace VP Julien Codorniou told VentureBeat in an interview at F8 in San Jose, California.

Workplace may not be the place for Stories

Since the launch of Workplace in October 2016, other popular Facebook features, like Safety Check and Facebook Live, have been incorporated into Workplace. Some customers have asked for Stories, but don’t expect to see your boss sharing them anytime soon, Codorniou said.

“It’s so important for millennials right now, sharing Stories, but we just did not think of it as an enterprise use case,” he told VentureBeat. “Some of our customers told us ‘Hey, since millennials use that to communicate, why don’t you bring that to Workplace? It’s one of those things that we keep hearing, and we are proceeding carefully with as well, because it would mean a big shift for our users.”

One tangible difference between the two platforms is that Workplace gives company administrators additional controls to monitor and record activity, so Stories that disappear after 24 hours might not work.

“Since the data belongs to the company, we need the company to manage the data — how they want to distribute it or moderate it. So we have some constraints that Facebook doesn’t have, because we serve companies who pay for our product, and they want to be able to moderate and administrate everything that’s happening on the platform,” he said.

An app redesign isn’t always interesting or welcome news, but with Workplace, it’s sort of a matter of necessity. The solution offers enterprise customers easy company-wide deployment because it resembles Facebook, an app with 2 billion daily active users.

Look closely though, and you will spot nuanced differences between Workplace and Facebook’s eponymous platform.

While the Facebook redesign places more emphasis on Stories and group communication, the Workplace by Facebook redesign focuses on chat, News Feed, and groups. A Notifications tab has also been added to act as an inbox and tell you about any mentions of your name or activity related to your company department or groups you follow.

“We adapted what we shipped for Facebook to the expectations of companies who pay for Workplace, to make sure that Workplace is not just a place where you talk about the work, but also the place where you get the work done,” Codorniou said. “We optimized for teamwork and collaboration, not for top-down enhancements, which is how Workplace started when we launched the product.” 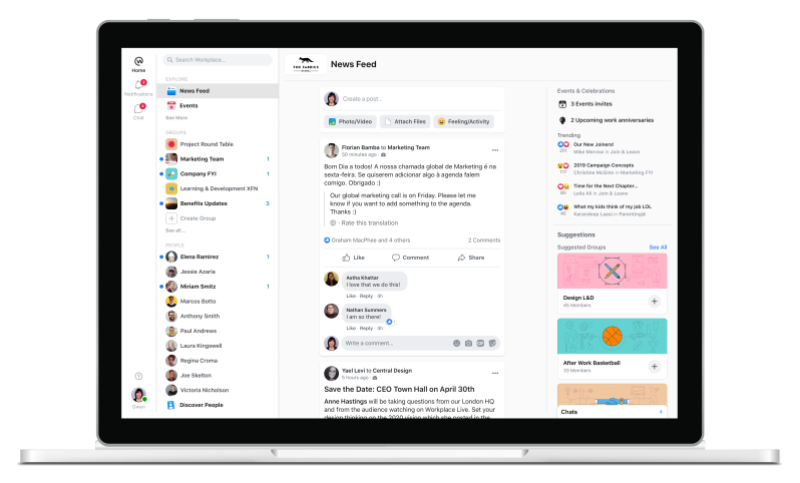 Some using the new web version of Workplace may also find it easier to send messages, with no need to open the separate Work Chat app and with group chats made by default for each Workplace group.

“I think there is a bigger emphasis on chat and notifications,” he said. “Workplace used to be — when it started, it was a very News Feed/Groups-first product. With the new interface, Groups and News Feed are equally important as chat, because people use Workplace for chat, as well, especially on mobile, so we wanted these two tabs to be equally important.” 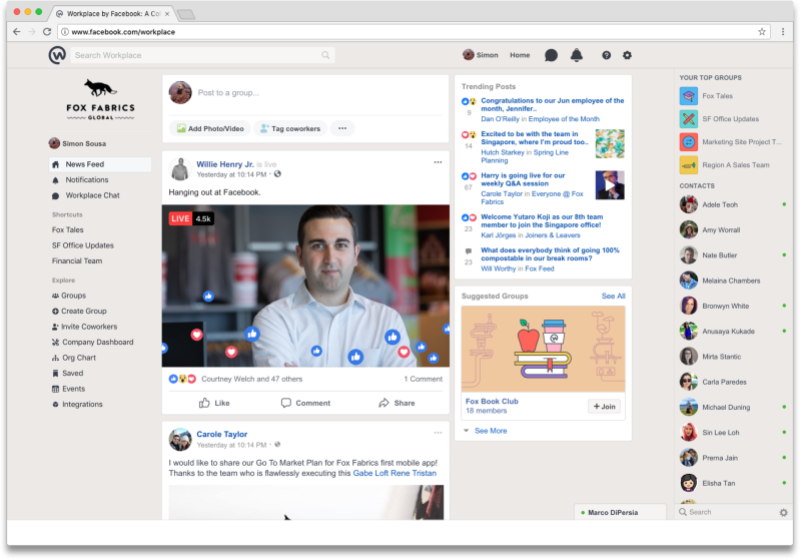 Workplace by Facebook has 2 million paid users, the company announced in February. At last year’s F8 event, Facebook announced that Workplace had more than 50 popular SaaS integrations with companies like Jira by Atlassian, ServiceNow, and Kronos.