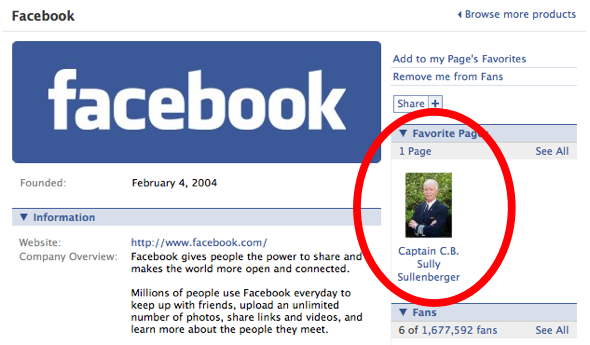 The successful crash-landing of crippled U.S. Airways flight 1549 yesterday by Captain C.B. “Sully” Sullenberger is one of the most uplifting stories of the new year — and social media sites have been part of the story. A Twitter user may have gotten the best picture immediately following the incident, and Twitter users haven’t stopped talking about it since. But more than a dozen Facebook groups and fan pages have also sprung up to adulate Sullenberger.

Facebook said there were 75,000 fans so far spread across the site, not counting the many other conversations that Facebook users are having about the incident within their profile pages and news feeds. This fan page, for example, has added around 7,000 fans in the last hour I’ve been watching it. Although that Sullenberger page is surely getting a boost because it’s the favorite page of Facebook’s own fan page (see above).

That’s not meta, that’s social media cross-promotion in action. Seriously, who’s not inspired by the story — after a flock of birds destroyed the plane’s engines, Sullenberger successfully navigated it to a crash-landing on the Hudson River, saving everyone on board. Cable television shows are talking about the story non-stop but users can’t do more than watch the anchors talk. Sites like Twitter and Facebook let them share their own feelings. In an era of corrupt politicians and small-minded business leaders, this display of heroism — and the conversations around it — helps bring everyone closer together. As Twitter user jimformation puts it: “If we all did our jobs as competently & professionally as Chesley B. Sullenberger III did, the economy wouldn’t been in the mess it is now.”