Facebook today announced that sponsored messages are being rolled out to more businesses. The Messenger ads were initially made available to a small number of businesses but will become available to all businesses in the coming months, the company said in a blog post.

Unlike other Messenger ads, sponsored messages that pop up on your Messenger home screen will not be marked as such. In fact, they look like all other conversations on Facebook Messenger. 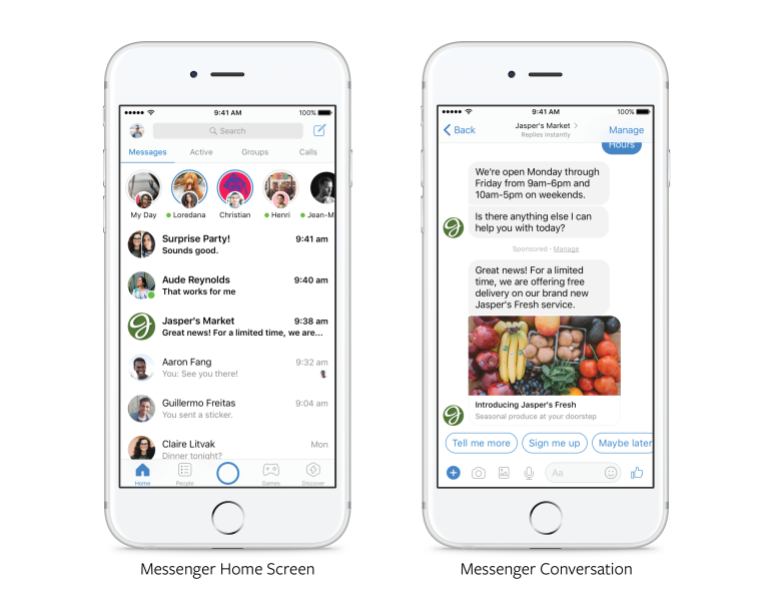 Advertisers interested in sending sponsored messages must create a Custom Audience, which can be used for retargeting ads at people who have done things like clicked a Messenger bot call to action or deleted a Messenger bot, or simply to target new Messenger bot users.

Advertising and business services through Facebook’s messaging apps have grown steadily in the second half of 2017 following questions about monetization this summer. In July, while onstage at MobileBeat, Facebook Messenger head of product Stan Chudnovsky announced the company will gradually bring ads to the Messenger home screen worldwide. In recent weeks, Facebook opened the Messenger objective for ad campaigns.

At the same time, verified WhatsApp business accounts and a paid WhatsApp customer service app have also opened up.

In August 2016, after initial restrictions on promotional material, Facebook Messenger opened to promotional and marketing material. Ads that appear in the Facebook News Feed and lead to a chat experience with a human or automated bot on Messenger have been available since the launch of Messenger Platform 1.3 in November 2016. Since then, those same ads have expanded to Instagram.

Both WhatsApp and Facebook Messenger garner more than 1 billion monthly active users around the world. They compete in the same space to connect businesses with customers as other chat apps with hundreds of millions of users, such as Skype, Apple’s iMessage, and Twitter.

Silicon Valley may have just began to come around to this form of conversational commerce, but it’s been a big part of business in Asia for a while now.

WeChat and Line have offered advertising in one form or another since 2014 and 2015, respectively.

Advertising has become the highest grossing sector of Line Corp, the company behind the Line app. According to earnings announced in late October, 47 percent of the $371 million in Line revenue in the past quarter came from advertising, up 40 percent compared to the same quarter last year.