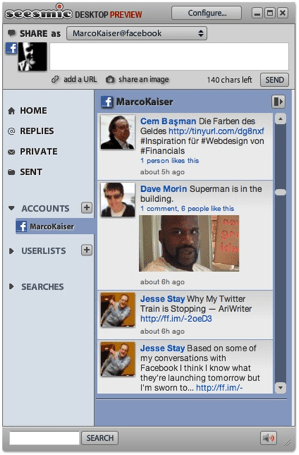 Facebook is trying to get third-party developers to integrate users’ home page “streams” (formerly “news feeds”) by adopting a new open standard. Now these streams can be accessed from any site.

Developers still must ask a Facebook user’s permission to access data in their “stream” — their shared items, status updates, etc. — before displaying it in a separate web site, mobile or desktop application.

This means that another company could theoretically build their own version of the old, automatically-generated Facebook home page, if enough Facebook users gave them access. Until its redesign last month, Facebook used its own algorithm to show you what you’d find most interesting — friends’ new photo albums, etc. But the redesign shifted most of that information to a new “highlights” section on the right-hand side of the site. The new “stream” only shows you status updates (much like Twitter).

With these new methods, you can access the stream on behalf of a user and then filter, remix, and display the stream back to that user however you choose, wherever you choose, in the manner most relevant for the user experience. Other new API methods will allow users to both publish into the stream and to add comments and “likes” to posts in the stream.

In one early example of the stream in action, Seesmic has integrated the Facebook stream with its existing desktop application for Twitter. Check out the company blog post here.

Developers can read more about it here.