“The mission of the company is to make the world more open,” 26-year-old Facebook CEO Mark Zuckerberg told Time magazine for a report this week titled “How Facebook is Redefining Privacy.”

“Zuckerberg believes that most people want to share more about themselves online. He’s almost paternalistic in describing the trend. 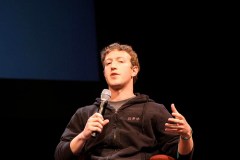 Most controversially, the popular act of creating two online personas — one for work, one for play — is something Zuckerberg wants to make go away. He told The Facebook Effect author David Kirkpatrick, “Having two identities for yourself is an example of a lack of integrity.”

Facebook’s CEO has come a long way in the past year in learning how to choose his words when speaking to the public. But when he says, “the way people think about privacy is changing,” make no mistake that Mark Zuckerberg really means, “I made them rethink it.”

[Artwork by Yuji Yoshimoto for Time.]