After a year marked by a number of data privacy scandals, Facebook continues to see its revenue and user count grow — although it continues to add daily active users more slowly than it did several years ago.

For the last three months of 2018, Facebook reported 2.32 billion monthly active users and 1.52 billion daily active users. That’s up from 2.27 billion and 1.49 billion respectively last quarter, and up 9 percent year-over-year on each count.

Other user metrics to note: Facebook added 1 million DAUs in the U.S. and Canada — but it’s the first time that number’s gone up since Q1 2018. Facebook also added three million DAUs in Europe after losing users there for the last two quarters. 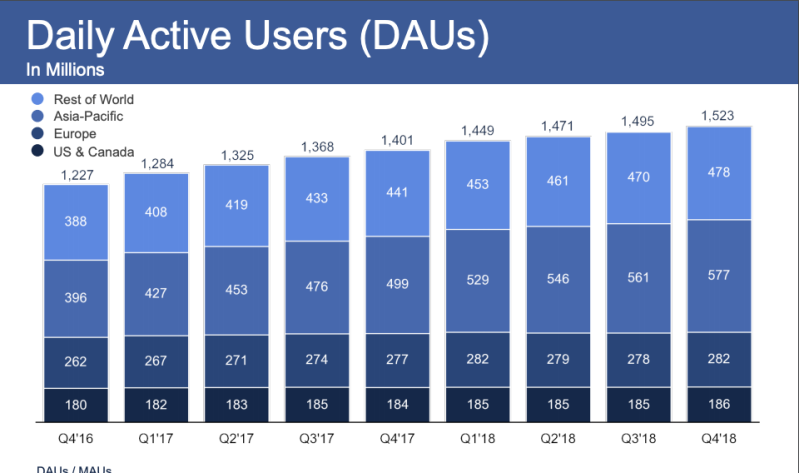 “Our community and business continue to grow,” CEO Mark Zuckerberg said in a statement. “We’ve fundamentally changed how we run our company to focus on the biggest social issues, and we’re investing more to build new and inspiring ways for people to connect.”

On the last earnings earnings call, Zuckerberg said that “messaging and Stories make up the vast majority of growth in the sharing that we’re seeing,” while acknowledging that Facebook Stories have been slow to grow, and that advertisers still primarily reach users through NewsFeed.

While Facebook experienced strong growth in 2018, the company’s relationships with lawmakers and consumers were marred by continued fallout over its failure to stop Cambridge Analytica from improperly obtaining user data, and questions about whether it was doing enough to stop hate speech and disinformation from spreading on its platform. The Cambridge Analytica episode prompted Zuckerberg to testify in front of both chambers of Congress for the first time.

The company’s earnings announcement also came on the tail end of a rough day for the tech giant. Yesterday, TechCrunch reported that Facebook had been secretly paying users to install a Facebook research app that tracked their browsing activity and what kind of apps they were downloading. The app had a purpose similar to Onavo Protect, which Apple banned from its app store in June.

Facebook got around that ban by running the app on a certificate meant for enterprise apps. Apple then announced this morning that it had revoked Facebook’s enterprise certificate because “Facebook has been using their membership to distribute a data-collecting app to consumers, which is a clear breach of their agreement with Apple.” As a result, none of Facebook’s internal apps have been working today, Business Insider reported.

This quarter, Facebook said that around 2.7 billion people use one of its “family of apps” each month — Facebook, Messenger, WhatsApp, and Instagram. CFO Dave Wehner said on today’s earnings call that Facebook will eventually stop reporting “Facebook-only community metrics.” As the New York Times reported last week. Facebook plans to unite Messenger, WhatsApp, and Instagram’s messaging structure to make it easier for people to message the users of each of these various apps.