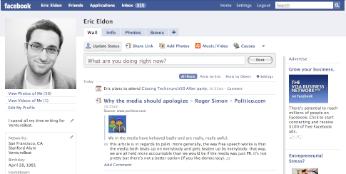 The new feed-focused Facebook redesign will be fully launched to users next week, according to the company — after a final mystery feature is fully implemented. This feature intends to make third-party applications more obvious to users.

Since the redesign was first introduced in beta this summer, users have been able to choose either the old or new design. Now, get ready for a confusing rumor about it.

An explanation of the initial rumor about a drop in usage, therefore, is that one metric — pageviews — has indeed dropped, while “overall” consumption of information has increased. For what it’s worth, Facebook tells me that pageviews have never been a focus, anyway.

I don’t know what to think, at this point. These conflicting rumors mirror everything I’ve seen so far. On the one hand, the new focus on feeds of information is prescient. It does, in my experience, help users find more information faster than social network interfaces typically have in the past. On the other hand, many users seem confused by it, which would explain a decrease in usage.

Now, about that mystery feature for applications. From Facebook’s blog post about it:

Based on some of this feedback, we’re working on one more interesting feature to help make your applications more easily accessible to your users. We’ll provide more details as we finalize the design, but it won’t require any changes on your end.

The redesign has — up to this point — been less positive for third party developers. The old design’s user profiles were host to many apps that the redesign now wedges into a tab called “boxes” on the profile page. Some developers, meanwhile, tell me that the new focus on feeds hasn’t been a great new way to attract and retain users. Their stories are apparently not getting as much play as they’d hoped.

The new publishing feature “has yet to make a significant difference for apps, but developers have high hopes that consumers will increase usage over time,” according to Adam Caplan of Super Rewards. His company sells ad-based incentives for game applications on social networks, and has a good window into what many developers are thinking. He adds:

Application developers have largely worked through any necessary changes to their apps necessitated by Facebook’s recent Platform updates, without seeing any permanent decline in overall traffic. But that time will tell given the changes to permissions.

Since the redesign is about to roll out to all users, we’re about to discover just how popular it is, and how it affects applications.