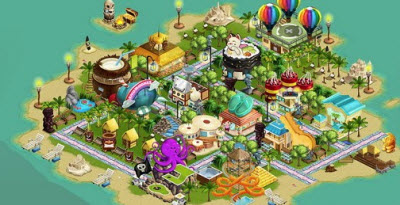 After giving LOLapps the death penalty, Facebook is granting a reprieve. The social network allowed LOLapps to begin operating its apps on Facebook late Monday night after taking them down for a couple of days.

Facebook made all of LOLapps’ apps inaccessible over the weekend after it found what it called “violations of its terms of service.” Those violations are likely related to privacy issues. The Wall Street Journal on Sunday reported that it found that a number of Facebook apps had improperly transmitted private user identification to third parties such as internet ad and tracking firms. Facebook said the consequences of transmitting the private data were exaggerated in the press. But it considered the breaches to be serious enough to ban all LOLapps apps.

Now it has restored them, and LOLapps fans can get back to playing their games. According to AppData, LOLapps has more than 16 million monthly active users playing games such as Critter Island (pictured). But the San Francisco-based company said it has more than 150 million users if you consider all of the users who have created quizzes and personalized gift apps. Those apps show up as created by individuals, not by LOLapps. But LOLapps can make money from those apps.

The incident raises a number of issues. Try as it might, Facebook is finding that protecting privacy is easier said than done, since it must enforce its policies across more than 550,000 apps. Also, for companies such as LOLapps, the bans can come as complete surprises. LOLapps users were completely in the dark when the apps simpy vanished from Facebook without explanation. They worried that, after pouring many hours into cultivating their characters, their accounts might have been permanently deleted.

For LOLapps, the lesson of diversification is clear. To be entirely dependent on Facebook is folly. As rivals such as Google prepare to launch social networks that compete with Facebook, the opportunity is ripe to steal developers and users away from Facebook.

In a statement, LOLapps said, “”We learned that we were in violation of Facebook’s policies relating to sharing information with third-parites. We have worked closely with the Facebook team to ensure that our applications and games are in compliance with their policies and look forward to continuing to partner with them to bring the safest possible experience to our users.”