Facebook’s latest transparency report, which covers the second half of 2015, is out. And the social networking company says it continues to see an uptick in government requests for user data worldwide. In fact, authorities have requested information about account data 46,763 times, a 13 percent increase from the first half of last year.

The company has also revealed for the first time the percentage of requests it has received that include non-disclosure orders. According to Chris Sonderby, Facebook’s deputy general counsel, “approximately 60 percent” of all requests received for user data that came from the U.S. government contained a gag order prohibiting the company from even notifying users. In looking at the specific report, it’s unclear which request types were impacted by this, except that it did not refer to any national security figures. 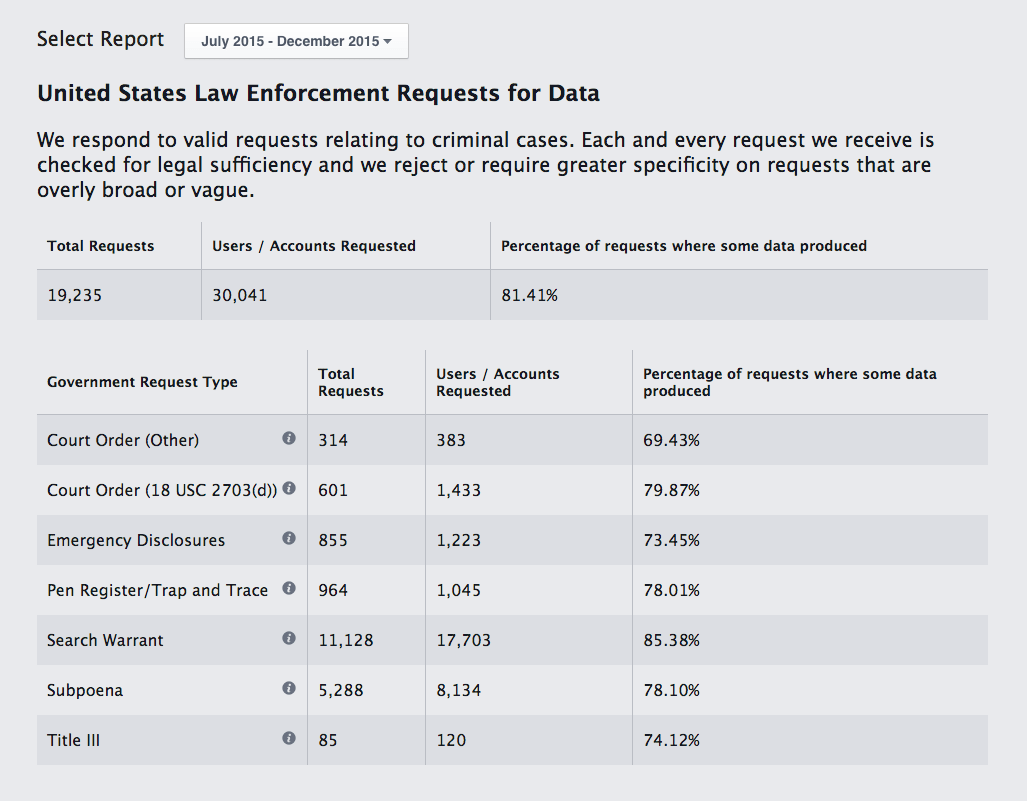 Above: Facebook government request report from the U.S. for the second half of 2015.

“As we have emphasized many times, Facebook does not provide any government with ‘back doors’ or direct access to people’s data. We scrutinize each request for user data we receive for legal sufficiency, no matter which country is making the request. If a request appears to be deficient or overly broad, we push back hard and will fight in court, if necessary,” Sonderby wrote.

There were certainly quite a few events that may have precipitated the increase in government requests during the latter half of 2015. In its transparency report, Facebook cites case studies to give readers a better understanding. Sonderby specifically calls out a single photo related to the November 2015 terrorist attacks in Paris, saying that the image “allegedly violated French laws relating to protecting human dignity.”

“We restricted access to more than 32,000 copies of the photo, in France only, in response to a legal request from the French government,” he wrote.

To reinforce its position that it doesn’t voluntarily surrender user information to governments, Facebook also explained how it’s advocating for improvements in public policy and cooperation with international law enforcement. Sonderby explained that Facebook was a supporter of the Email Privacy Act, which was passed by the U.S. House of Representatives this week, and that it also supported improving ways to make the Mutual Legal Assistance process more efficient, along with “establishing agreements between governments that resolve conflicts of laws and allow providers to respond to foreign law enforcement requests in a manner consistent with international human rights.”