Facebook has added a new option for its search bar, allowing users to search for advertising pages.

This continues a steady creep in search options, which already includes tabs to search for people, groups, events and applications.

It raises a new question about Facebook’s ambitions, as it finds itself the David against the Google Goliath. Will it pull out the ultimate slingshot: a full-fledged search engine for the web, not just the Facebook site?

This question is significant, because Facebook has so much data about people and preferences that it could potentially add quality to search results. If it were to duplicate a “good-enough” clone of Google search results — possibly by building on Microsoft’s search engine — and then add in its own data (all of the stuff that is password protected and which Google’s spiders can’t get to), Facebook could potentially provide a first class search engine that really rivals Google.

Rewind to the summer of 2006. That’s when speculation arose that MySpace — at the time, growing at a break-neck pace — might unleash its own search engine to rival Google. But MySpace, mainly an entertainment company, couldn’t figure it out. In August of that year, MySpace announced Google would power its web search and ads as part of a nearly $1 billion deal over three years. MySpace was content to do a web search deal without tight look-and-feel integration. However, that company suffers from a lack of technology ingenuity. Facebook, by contrast, is led by founder and CEO Mark Zuckerberg. He has a strong technology background and maintains a technology focus for the company.

This is speculation, but let’s take a gander at what Facebook’s search would look like. Facebook would first license Microsoft (or even Google’s or Yahoo’s) search engine to power its own web search. The web search tab would be just like “People” or “Pages” (“Pages” is the name given to Facebook’s advertising pages) in the image below. Facebook could record which users click which results. Over time, Facebook could use the data to enhance search results based on what networks of friends click, an idea some call “social search.” If successful, might Facebook develop a major sustainable competitive advantage in search over Google? This would surely create a buzz — enough excitement that people would notice, and start trying it out. Facebook would have to work mighty hard at this, because Yahoo and Microsoft have both failed to stem Google’s momentum, despite major investments to do so. But Facebook has some other big advantages: It is still private, and resides just miles from Google’s campus. Luring over top search experts with stock options (albeit, expensive ones) could be like shooting fish in a barrel. Facebook has gotten a new chief financial officer, Gideon Yu, as well as top engineers from the search giant already.

In August, I attended a talk by Marissa Mayer, Google’s leading executive on search, who said Google has worked on social search. However, she was somewhat dismissive of the opportunity. She said social search hadn’t shown much promise, but that if someone were to prove its worth, Google would be in a good position to incorporate it. She said Facebook is a communication tool, whereas search is a research or informational tool, meaning that social search may not make sense.

A common complaint by advertisers about Facebook is that users want to stay on Facebook doing what they’re doing — visiting friends’ profiles, checking out pictures, reading the news feed, and so on. Users are less likely to click on search results (or ads beside search results) because unlike Google, they’re not necessarily searching for things. If search becomes efficient on Facebook, that could all change. However, some might question if users would be willing to click on web results inside Facebook because that would take the user away from Facebook.

That concern is relevant to ads on Facebook, but not necessarily relevant to whether users would do web search on Facebook. Users may want to do something when they are done with Facebook, and many times that means web search. More than five percent of Google search visitors used MySpace right before Googling. In other words, social network users will conduct web searches. It’s just a matter of getting users to do web search on the social network site, rather than navigate away to Google or another search engine.

What do we know about the number of Facebook searches to date?

Facebook users do more than 600 million searches per month. Facebook users are trained to use the search box to search for friends’ names, groups, events, applications, and now Pages. Teaching users to use the box for web search is not far behind. Doing a web search — something like “flights to San Jose” or “Tahoe ski lift tickets” — is often distinct from what Facebook users currently search for — something like a person’s or group’s name. That means when users do Google-type searches in the Facebook search box, Facebook would be able to deliver web results right away without any extra steps. In contrast, MySpace search isn’t as well structured, and forces users to click a drop-down box to do a web search.

[Update: Danny Sullivan, search expert and publisher of the blog Search Engine Land, wrote in the comments that Facebook will need to develop its own web search technology if it wants to go head-to-head with Google in web search. As proof, he compared Yahoo and AOL. Both companies outsourced search, but later only Yahoo built in-house technology. Of the two, today only Yahoo is considered a dominant search player.

No one would argue that Facebook would be better served to own great search technology than be dependent on licensing it. But it’s worth noting Yahoo had something AOL didn’t: sticky properties like Yahoo Mail that each day attract tens of millions of visitors to Yahoo. Yahoo funnels these users into Yahoo web search. AOL by contrast watched its dial-up business disintegrate along with its search share. Facebook users are at least as active as mail users, with over 50% of Facebook users returning each day. Facebook could funnel these users into Facebook web search.]

Finally, here’s some back of the envelope math by Facebook observer Lee Lorenzen. Note that Lorenzen often gushes in his assessment of Facebook, because he has a business that depends on its ecosystem, but his assessment is interesting nonetheless. Even without launching into full-fledged search, he says Facebook could make good money. Lorenzen projects Facebook will have 200 million active users by December 2008. In his model, Lorenzen assumes each user would do one web search per day, but that assumption may not apply to MySpace given the company only collects a few hundred million dollars per year from Google for their search and ad deal. Still, with Facebook searching for ways to make money, you’ve got to wonder why Facebook wouldn’t try to build this out more.

“[G]iven the time spent by Facebook users inside of Facebook and given that a search box lives in the left-hand nav of every Facebook page, it seems quite possible that the half of all Facebook user who come to the site every day might do at least one web search (when Facebook picks a partner to power their web search). So for 2008, this works out to 100 million * 0.5 * 365 days = 18 billion web searches per year. Google handles about 64 billion US web searches per year and monetizes these searches at around $0.26 per search == $16 billion. Assuming Facebook’s search engine partner only monetizes these at $0.13 per search due to their relative lack of Cost Per Click search inventory and Facebook users’ dislike of leaving Facebook, this still works out to $2.3 Billion in search revenue in 2008 and $4.6 Billion in search revenue for 2009. Assuming their search partner takes 20%, this leaves $1.8 billion in 2008 and $3.6 billion in 2009 for Facebook. Not bad for a business that is ultimately no more complicated than Facebook signing an “AdSense for Search” type of deal with Microsoft, Yahoo or Ask.” 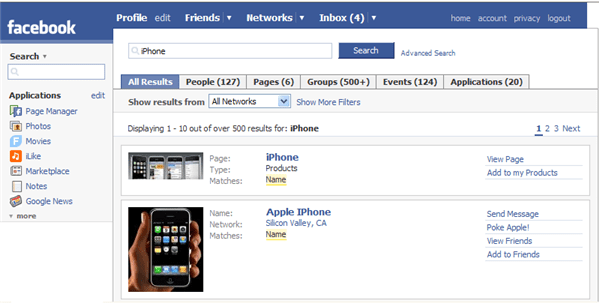