Facebook and a Stanford University lab specializing in persuasive technology have launched http://peace.facebook.com, an experiment in social networking data with a warm, fuzzy premise: Can online friendships translate into greater collaboration and reduced conflict in the world?

The site is part of a broader PeaceDot Initiative, which is a volunteer-run, distributed movement to create peace sub-domains across the web. It’s meant to showcase new data-sets and new tools for creating peace. (Hat tip to commenter Mark Nelson below — who refers interested readers to this Facebook Page.)

Facebook’s take on peace tracks social networking connections bridging ethnic or religious divides — between Israelis and Palestinians, Sunnis and Shiites, and Christians and Atheists, just to name a few. With 300 million users, Facebook is already proving to be an interesting, real-life laboratory. Complete with line graphs, the site continuously flashes different data points collected over the last 24 hours: 8,431 Albanian-Serbian connections, 7,339 India-Pakistan connections, 71,555 Muslim-Christian connections, and even 30,518 Republican-Democrat connections here in the U.S. The numbers are high enough to make an impression. 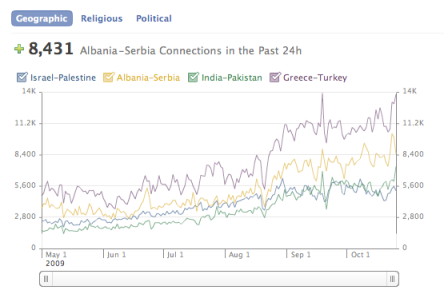 In addition to the data on online friendships, the site also tracks results to the survey question (asked to 500 Facebook users everyday) “Do you think we will achieve world peace in 50 years?” Right now, only 7 percent of U.S. respondents replied “yes.” The figure is higher in all of the other polled countries, with Colombia at 38 percent. Notably, the most developed nations — the U.S. and Germany — have the least reported faith in world peace, while Egypt, Colombia have the highest.

Other features on the simply-designed site include a stream of comments on the project, updated almost every 10 seconds from Facebook users. Most of them are overwhelmingly positive: “Love your Brothers As you Love Yourself and PEACE is Possible” and “Thinks this is the next generation of the peace movement.” There is also a link to the fan page for Facebook for Good, a group that reports on the various ways Facebook has been leveraged to do good deeds, like finding a lost cat or forming support groups. Peace on Facebook clearly falls under this banner, but it’s unclear whether they are affiliated.

One of the project’s creators, Dr. BJ Fogg is holding an event on the Stanford campus tonight to share more about the project, which the Stanford Persuasive Technology Lab refers to as Peace Innovation. Fogg’s lab focuses on how technology — from software to mobile phones — can be made to modify human behavior for the better.

The web site for the group behind the project is still empty. But we’ve embedded the group’s Twitter stream, an old presentation from Fogg and a live stream of Fogg’s event, which happens at 7 p.m. PST today.