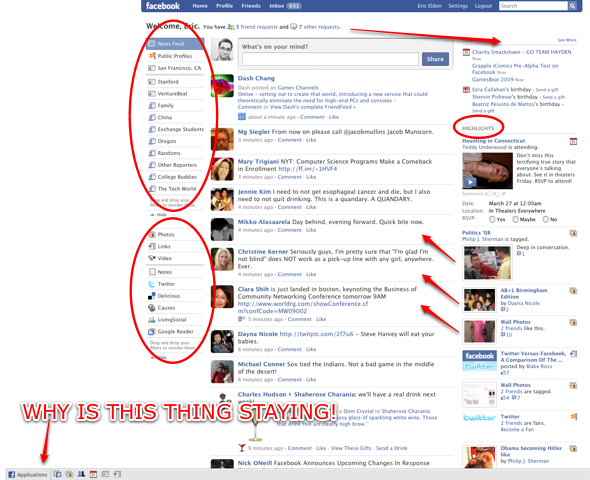 Today, Facebook is responding to criticism about its recent site redesign with some specific descriptions of tweaks intended to make its latest interface more usable. While the scale of dissatisfaction hasn’t been clear, more than 1 million of its 200 million or so users (including a vocal number of VentureBeat readers) have expressed their opposition.

The announcements today don’t indicate a full roll-back to the previous design — a move we didn’t seriously expect, anyway — but rather a number of iterations that should make some new features more accessible to most users.

Perhaps most importantly, Facebook is refining what information appears in a user’s “news feeds” homepage, or what it now calls the “stream.” These streams, which have so far emphasized status updates, will begin showing tagged photos — photos have so far seemed to appear in the “Highlights” section on the right-hand side. Users will also be able to more carefully control information that appears in feeds from users and from third-party applications, which is something we’ve been looking forward to (see Friendfeed for more). And to make the stream constantly interesting (one hopes), real-time updates are coming soon.

Other forthcoming changes include more highlights in the “Highlights” section, a relocation of friend requests and event invites to the top of the right-hand column, and easier ways to create a Friend list filter.

However, the company is sticking by its longtime bottom navigation bar, which has received new emphasis in the redesign and which at least two writers at VentureBeat don’t really like (see screenshot). According to the company blog post by Chris Cox, Facebook’s director of product:

Application bookmarks continue to live in the toolbar at the bottom left of the page. You can quickly access your groups, events and other favorite applications from the bottom bar on any page.

Guess we’ll get used to it. Generally, these problems address a significant portion of issues that many critics (including ourselves) have brought up. If users are to figure out crucial components of the new interface, like how to customize their own streams, limiting them to the information they care about, Facebook needs to make that process as easy as possible.

The company also says that it regularly tests out changes with limited groups — suggesting that the changes are having the intended effect of increasing communication between people, despite the complaints.

Before we launch any new product, it first must pass a process of design, development and testing with a more limited user audience. If those results are satisfactory, we then release it for all of you to use. We know that no amount of testing is as valuable as what you have to say.