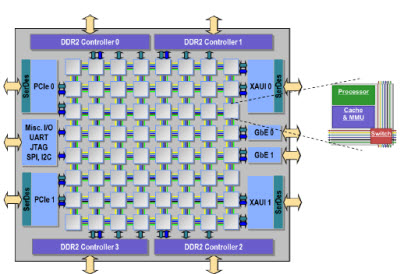 Tilera has been arguing for some time that its chips with 64 processing cores are more energy-efficient than typical Intel processors. But now Facebook is backing it up on that.

Facebook, one of the biggest consumers of computing technology, is announcing today that its study showed Tilera’s TilePro processor has the best performance per watt in the industry. The study says that Tilera-based servers can provide three times the performance for a given amount of energy as Intel’s x86-based servers. The ratio is four times better than Advanced Micro Devices server chips.

“This is the first third-party validation of our technology,” said Ihab Bishara, director of cloud computing products at Tilera, in an interview. 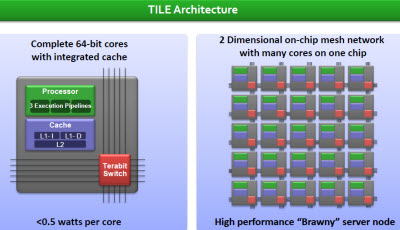 The finding is important because it’s critical for data center operators to pick the right configuration of chips and hardware for their operations that involve serving millions of web pages to users on a daily basis. Companies such as Twitter, Zynga and Flickr — all of which have tens of millions of users or more — are likely to pay close attention.

Facebook ran tests with x86-based and Tilera-based servers using a common data center application dubbed Memcached. The results of the study will be released at the Second International Green Computing Conference in Orlando, Fla. Facebook tested a Tilera-based server, the S2Q, which is built by Quanta Computer. Quanta supplies servers for Facebook’s open compute platform (data centers). The S2Q has eight Tilera chips in it. Each chip is a TilePro64 (pictured) with 64 cores, or computing brains, on a single chip. Both the x86 and Tilera servers could process transactions in less than a millisecond and had comparable delay times. But Tilera’s processors performed more transactions per second at the required latency level. 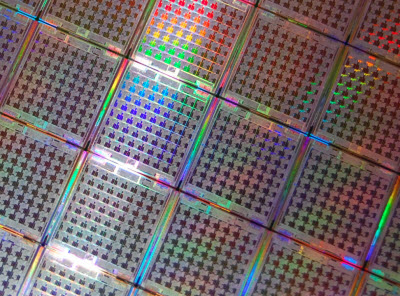 The TilePro64 has 67-percent higher throughput, a measure of how fast data can be processed in a second, compared to the x86 servers. Tilera does better because it has a way to interconnect its cores on a chip so that the cores can work in parallel without consuming a lot of power, which has become the highest cost in a data center, said Bishara.

Tilera says it is not allowed to say whether or not Facebook uses its chips in servers in its data center, which has to support more than 750 million users as they access their Facebook pages. But Facebook plans to run the same study on Tilera’s new 64-bit Gx3000 series chip, which was announced in June. The Gx3000 will be available in samples later this month and can handle 10 times the performance per watt compared to Intel’s processors.