As Facebook continues to explore new verticals, such as virtual reality (VR), drone-powered internet access, and computer vision research, it’s easy to forget about the company’s core raison d’être — as a platform for sharing information with friends.

It’s generally accepted that people are sharing fewer personal updates than they once did — that’s not to say people are sharing less overall, or even visiting the site less often, but they’re less inclined to tell their hundreds of “friends” what they’re up to. That could explain why the company is continuing to experiment with new ways to put the personal back into Facebook and ensure it retains its stickiness. For example, back in June, Facebook revealed it was fine-tuning its News Feed algorithm to surface more posts from friends and loved ones, and it later re-tuned the News Feed to try to cut down on clickbait — a wearisome omnipresence on Facebook in recent years.

Now, it seems, Facebook is testing out a new feature to encourage people to post more personal updates by prompting users to connect with friends in other countries through big events that are happening.

The feature appears under the usual “What’s on your mind” status update box, and, in the example I encountered, Facebook reminded me that a friend lives in India, where a new cricket season was about to begin. It then invited me to write a new post to “show you’re thinking of him.” 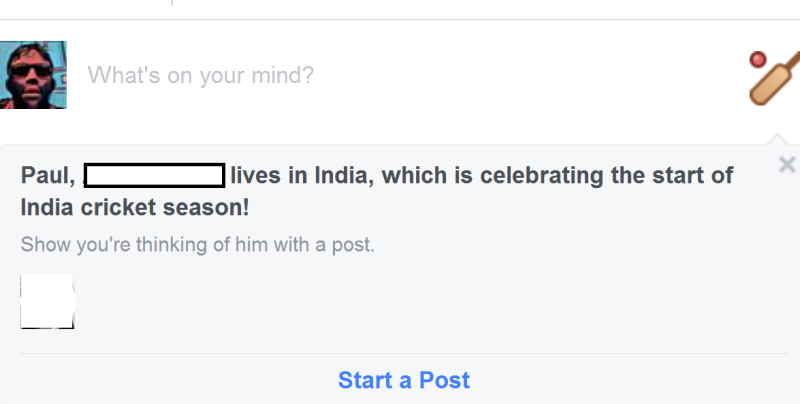 When I hit “Start a Post,” I was then asked to say something about this special occasion, suggesting that I, too, am celebrating the start of the Indian cricket season, despite my being in the U.K.

Above: What’s on my mind? I don’t like cricket..

Facebook is known to give its developers the freedom to test out new features on small groups of people to see what kind of traction they garner, so there is every chance this won’t see the light of day. Certainly, it seems odd that Facebook’s algorithms wouldn’t know that the friend in this instance isn’t someone I interact with regularly and that at no point have I indicated that I like cricket — I’d rather watch paint dry, quite frankly. Moreover, the default status update suggests to other users that I’m in India for the celebration.

But this all ties in with Facebook’s efforts to get people posting more personal updates. Last year, Facebook prompted users to post a video to celebrate their friend’s birthday, which is relevant to the company’s broader push into the video realm. And throughout 2015, it also prompted users to post a status update around Memorial Day, the Supermoon Lunar Eclipse, and even the premiere of the new season of The Walking Dead.

Facebook now claims in excess of one billion daily active users, which is great news for the company’s ad business today. But if people stop contributing personal content, the social network will gradually become less appealing — Facebook grew off the back of connecting friends, and if loses that personal edge, people will eventually drift off.