Facebook users who logged in last night may have caught a glimpse of a new feature on Facebook. The largest social network in the world is testing “Star Your Close Friends,” an experimental feature that will ensure you see more of your closest friends’ status updates.

Star Your Close Friends is simple and intuitive to use. A new area simply appears at the top of your news feed with the title “Don’t Miss the Good Stuff.” When you move your mouse over your friends’ images, you see a grey star. Click and the star turns yellow: you’ve starred that friend.

Now more of his or her status updates will appear on your Facebook wall. 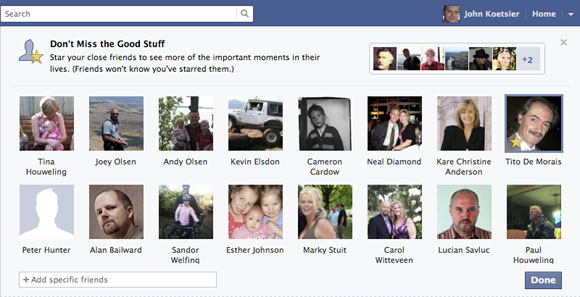 A Facebook representative contacted by VentureBeat told us that Facebook is trying to help users customize what status message they receive: “Yesterday we started rolling this out for some users to help them easily group their close friends into a list.”

Facebook seems to be fairly intelligent about who it presents to users as potential “star-ees.” When I saw the feature last night, the friends I most often interact with were shown by default. But people can also search for specific friends to add ones that are not seen.

One important thing to note: Your friends will not know whether or not they’ve been starred, eliminating a potentially sticky privacy issue.

Above: A starred friend.

The first has been a problem for some time. As we know from Facebook itself, only 10 percent of your friends may actually see any given status update from you. The challenge is so severe that Facebook was actually testing a feature to allow you to pay to ensure that your status updates were noticed. But now, Star Your Close Friends will allow people to make sure they see important news from the friends they care about most, solving a large part of that problem, if only from the perspective of the person getting the status updates.

The second problem, friend categorization, is more of a competitive pressure from Google+. Circles, the way Google+ helps you categorize your connections, has widely been admired and praised. Facebook tried to address this with Smart Lists, but not with any great degree of success. Star Your Close Friends, however, is extremely simple and quick — in fact, it’s easier and more intuitive than Circles. Instead of multiple circles, overlapping circles, and circles with different levels of status update visibility, Star Your Friends is simple and binary: friends are either in or they’re out. And a single click is all it takes.

After starring friends, Facebook adds a new list in the Friends: Close Friends. A helpful pop-up tells you that “Now you can jump straight to your close friends’ photos and news. You’ll also get notifications whenever they post.” 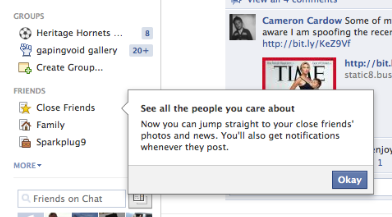 Interestingly, Facebook seems to be trying to limit how many friends you star. Not by imposing a hard limit, but by visually indicating in the interface that the user is almost filling up a limited space. Here’s what you see as you add friends before hitting the recommended maximum, and what you see after continuing to add friends. The +2 seems to indicate that you are possibly adding more than Facebook recommends. 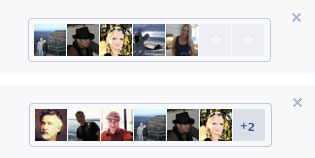 Star Your Close Friends is a very interesting new development. Would you welcome this change? I know I would.