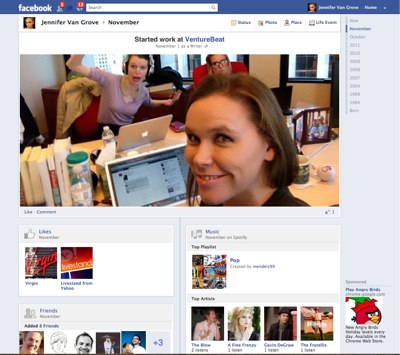 Facebook is slowly introducing its anxiously-awaited radical redo of the standard user profile, otherwise known as Timeline, by rolling out and testing the feature in New Zealand, the company announced Tuesday.

Timeline was first announced in September and is perhaps Facebook’s most ambitious contribution to the world of social networking since News Feed. The progressive feature swaps out the user’s profile for a scrapbook-inspired, expandable storybook. Timeline is comprised of an extra large cover photo, and uses status updates and special occasions to fill in the blanks of a user’s online and offline life.

New Zealand is the first country to officially get the new Timeline feature. Developers –and crafty users who pose as developers — have had access to the not-ready-for-primetime feature since the big reveal at Facebook’s f8 developer conference. So Timeline already has more than one million users, product manager Sam Lessin said.

But Timeline’s own timeline has been a topic of constant speculation, with the company remaining mostly mum on the subject. Its arrival in New Zealand does suggest that the feature is close to making its worldwide debut. Still, Facebook is not ready to share timing around a wider rollout, a company spokesperson said.

So why New Zealand? For starters, it’s an English-speaking country with a relatively small population of more than 4 million people, so it’ll give the social network an opportunity to kick Timeline’s tires a bit without taking it out for a full test drive.

“It’s far away from our data centers, so we can monitor speed and performance,” Lessin told the NZHerald.

“As a global company, we need to gain perspective and insights from outside the U.S.,” a Facebook representative explained to VentureBeat.

For now, we’ll just have to take the “coming soon” message at face(book) value, which means that we shouldn’t expect to see Timeline widely released for several more months.