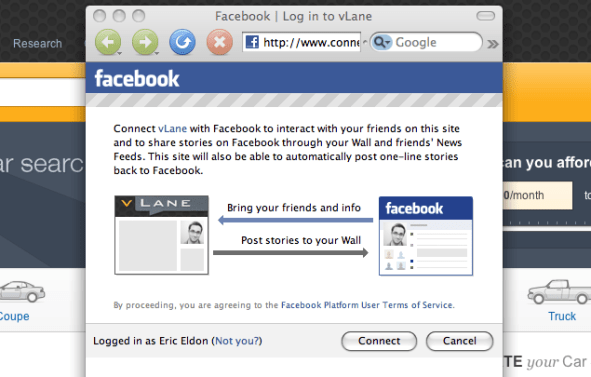 Facebook and Google have both opened services to the public today that intend to let you easily access any web site using versions of your pre-existing online identity. They both intend to help you find friends on other web sites to interact with, thereby making social interaction much simpler potentially anywhere on the web.

Facebook’s service, Connect, is now available for any web developer to access and implement. So is Google’s service, Friend Connect. Both sites have been giving access privately over the last few weeks and months, after both companies — and a third rival, MySpace — announced their competing initiatives this spring.

I’ve spent the last day or two experimenting with implementations of both Connect and Friend Connect. Connect comes across as far easier to use, and relevant. But it’s still rough. If you’re already logged into Facebook (which I, like many people, always am), you can click on the “Connect option” in a partner web site and with a click of an approval button, create and start using the site with your Facebook identity. You can also, importantly, post information about your activities on other sites back to Facebook’s home site — this could drive traffic back and forth between Facebook and other sites that use Connect.

Google’s Friend Connect is easier to implement on the developer side, but far more complicated for users, as I discussed yesterday. And worse, there’s no central hub to create a two-way traffic feedback loop.

While Google has been inviting seemingly random web developers to use Friend Connect, Facebook has a wide range of well known names on board. From the company:

The problem for Facebook, though, is that its partners aren’t necessarily using all the features of Connect. A quick look around shows Citysearch not showing me who my friends are on the site, nor what they’ve reviewed. When I log in to gossip site TheInsider, I can see friends from Facebook on the site, but under fake profile names that TheInsider has created; other interaction features are limited. 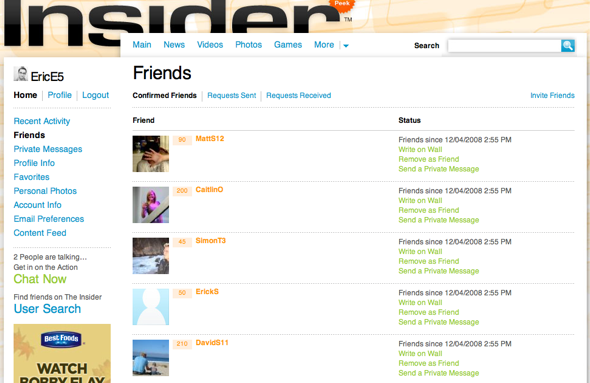 In other words, neither implementation makes it easy for me to interact with my Facebook friends on those other sites. So I don’t have anything meaningful to send back to Facebook, for the rest of my friends to see, there.

[Update: I don’t personally see any friend information on Citysearch but apparently, that’s because none of my friends have signed in to Citysearch using Connect. Facebook engineer Blake Ross, in comments below, says you can currently see friends who have accessed the site through Connect; so does Citysearch, after I’d asked the company about it:

If any of your Facebook friends have registered on Citysearch, then those friends and their reviews will appear on your member page. Given we just launched the new site 2 weeks ago and have sent only a tiny percentage of our total traffic … one-third of one percent of our total traffic to the site, its possible your friends have not yet registered on Citysearch with their Facebook Connect ID, which is why you are only seeing the general audience in the current environment. Once your friends’ begin to appear on your MyCitysearch page, then you will be able to see what they review and recommend. This social context will help you find interesting information on Citysearch.

I’ve attached a screenshot from the company, below. Note, as mentioned more generally above, if you review a business in Citysearch, you’ll be given the option of posting it to your Facebook news feed as well so your friends can see it. Citysearch says it hasn’t fully rolled out the integration, but it will keep me posted as it does. So stay tuned. 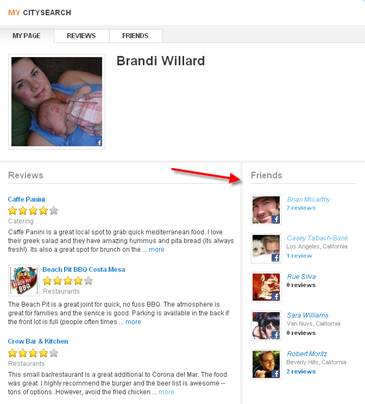