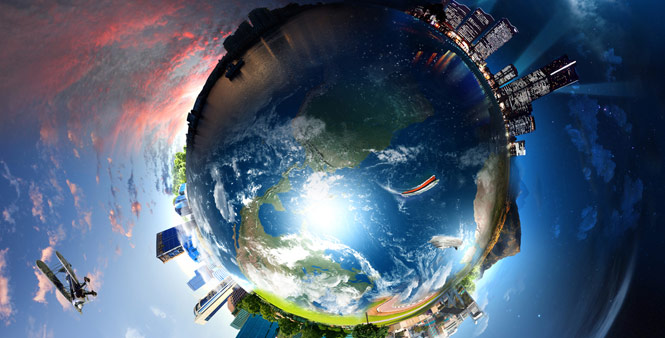 User numbers hit a new high, with 955 million worldwide visiting the site at least once a month. And earning are slightly above estimates, coming in at $1.18 billion in revenue and 32 percent year-over-year growth. Over half a billion are coming from mobile devices.

One of the most interesting slides in the company’s quarterly earnings release, however, is this one: 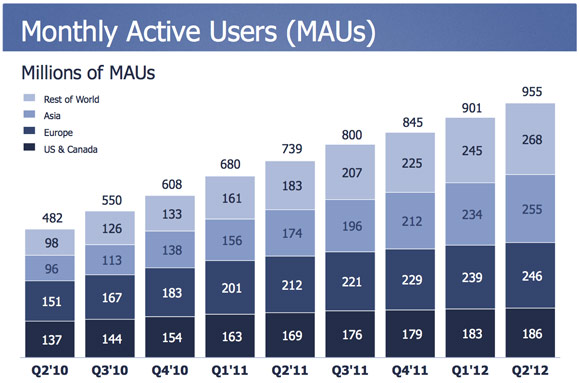 Just two years ago, the United States and Canada made up 30 percent of Facebook’s users. Fast-forward to today, and the percentage is a little bit different: under 20.

Not only has the percentage changed, but the growth rate is almost negligible: only about 35 percent user growth over 24 months for the world’s social utility. That compares to 170 percent growth in Facebook’s “rest-of-the-world” category, which includes Africa, and 165 percent growth in Asia.

On the one hand, this is expected and normal. North America has a limited population, about 350 million, of which Facebook has about a 53 percent penetration rate. That’s slightly up from about 50 percent at the end of 2011.

On the other hand … why are those missing 164 million people not on Facebook? It’s a question the company should ponder … particularly because US and European internet users are worth more to advertisers than any others. Internet users are valued at perhaps $1,200 to advertisers, with Facebook making about an annualized $5 as of the first quarter of this year, and Google collecting $20 per user per year.

But not all internet users.

Zambia’s average annual income is $1,600. In the Phillipines, a college professor might make $500 dollars a month. I don’t think Barney’s New York is banging down their doors to sell $5,000 Gucci bags. Not too many iPhones being sold in Cambodia.

As Facebook’s growth has transitioned largely to the developing world: Asia, Africa, Oceania … the average value to advertisers per user is going down. Just check another slide from the Facebook deck: 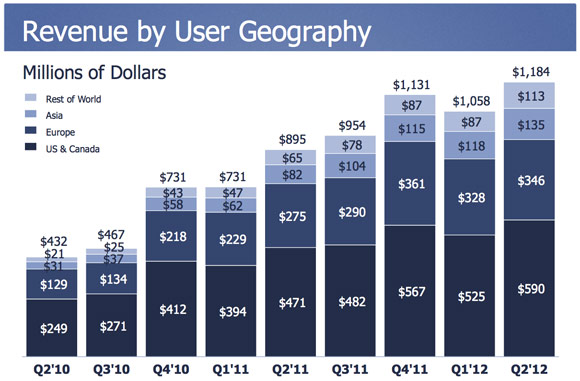 The biggest chunk of Facebook users — “rest of world,” at 268 million — accounts for the smallest slice of Facebook’s revenue, $113 million. In fact, if you do that math, you can find the average value to Facebook, per quarter, of each user:

The good news is, if this quarter is any indication, Facebook could be bringing in about $12 per US and Canadian user per year. But there’s also bad news … and that’s everywhere else.

Europe can probably be fixed with more time and attention than the US-centric Facebook has given it so far. Starting an office in London may help with that. But Asia? And the rest of the world? Those per-capita incomes aren’t coming up to U.S. standards any time real soon.

And that’s one of the reasons Facebook’s stock is getting hammered.