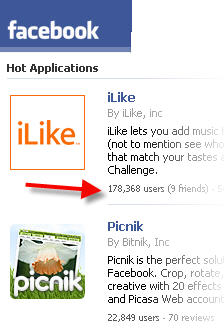 (Editor’s note: We promised a 24-hour moratorium on Facebook coverage. That is now over.)

Here’s the early winner of Facebook’s open embrace of third-party applications, announced two days ago: iLike, a hot music service that lets you discover music that matches your tastes with others.

iLike’s users on Facebook have reached around 180,000 early this evening, from a mere 1,000 on Friday morning — that’s orders of magnitude larger than any other of the new Facebook applications (see full list here).

Let’s be clear. Facebook is in the news for a reason. Its open-door policy to other services — offering them a clear way to make money — is highly significant to the wider Web 2.0 community, and both a possible boon and risk for Facebook itself. Its 24 million young users give Web 2.0 companies a fertile playground for testing. Facebook offers a level playing field, which means that companies that gain traction — like iLike — are doing so not because of superior amounts of venture capital or scamming techniques, but because the community is voting for it (although it would be naive to say that clever marketing won’t happen from within Facebook). The risk for Facebook is in forgoing earning revenue from its own services.

So why iLike? There’s been a huge demand for music-focused socializing on Facebook (which isn’t surprising considering how central music is to MySpace users). iLike helps people find new music by learning what their friends are listening to; through Facebook’s platform, it allows users to add music to profiles and help them find their favorite concerts (and learn which friends are going to which concerts). iLike also offers free mp3’s that match users’ tastes. (VB’s earlier coverage here).

We should point out that the leading application also has an advantage because it tops the list of “favorites” at Facebook, and new users are likely to look closely at it — and so there’s a snowball effect.

However, in a fascinating twist on the music issue, another music app on Platform, called Audio, was No. 2 on Facebook with over 30,000 users when we checked this afternoon. It has since disappeared from the application directory. Created by a single developer, Numair Faraz, Audio allows users to search for and listen to tracks in the applications’ library of user-submitted music files. It lets them take tracks from Audio and add them to their Facebook profile page. Faraz told VentureBeat he was in the act of presenting the application to friends who work with major music labels when he discovered that it was gone. He called a Facebook Platform contact, who he says is investigating the matter.

Faraz told he’s assuming this “is just some sort of temporary glitch.” Users, in the meantime, can still add Audio to their profiles at this link — Faraz says that he’s still gaining users through news feeds.

Start-ups that integrated their free-standing services with Platform are getting more users than they can handle, as Om notes. Most of all, iLike. CEO Ali Partovi is currently crying out for more servers to keep up with demand (see email below).

A note on Facebook’s search: We searched for “iLike,” and got gobbledygook. The first result is “Tim Ilikeyomamabetter Alford,” and it goes downhill from there. Facebook claims its search does the equivalent of 10 percent of Google’s search traffic, but it will need some work. 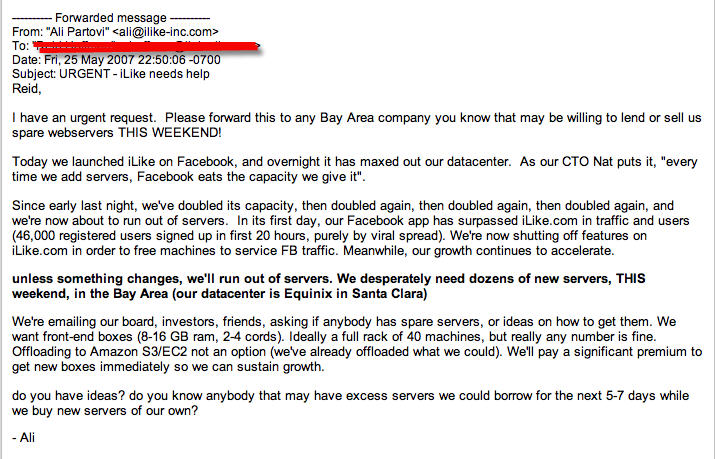