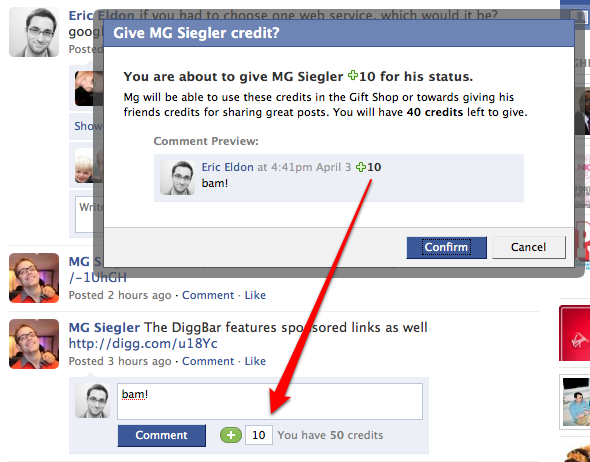 Facebook is testing out a way for people to show how much they appreciate friends’ status updates, links and other items on the site — its a new feature called “credits.” The idea is a more advanced form of commenting or liking an item on the site — and if it works, it could spur people to share more information that they think their friends will enjoy (and give them credits for).

While the concept is still undergoing changes, here’s how it works at this time.

Once you’ve left a comment with credits, you’ll see the credits appear next to the comment, following the feature’s green plus symbol icon. There’s no other way to create credits at this time. This means people need to think twice before giving their credits away.

Once you have credits, you can use them to give them away, or to buy Facebook’s virtual gifts.

In fact, the notion grew out of Facebook’s virtual gifts feature, as gifts-and-credits product manager Jared Morgenstern tells me. When it’s somebody’s birthday on Facebook, you can just leave a wall post, or if you want to go out of your way to show how much you care, you can give them a free or for-fee virtual gifts that will appear on their profile page. In the same way, giving someone credits shows that you’ve gone out of your way to show you much you care about what they’re sharing. 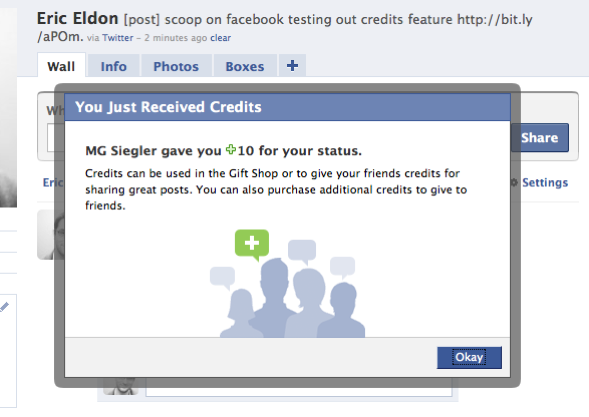 So its more like a gift and less like a virtual currency of the sort that you see in games, and less like buying virtual clothes to decorate an avatar. Competitive gaming features are de-emphasized. For example, there’s no leaderboard that shows you who on the site or among your friends has the most credits. You can only see how many credits you have when you’re looking to give them to somebody else or when you’re in the gift store. Your credit, er, score doesn’t even show up on your profile page. You can’t even see the total number of credits that people have together given a particular item.

Why does this matter for Facebook? The company could potentially use information about what items people are giving credits to in order to figure out which items to put in its new “highlights” section on its homepage (although it’s not right now). Credits can also show Facebook much deeper information about what people think of each other. If you’re constantly crediting back and forth with a few friends, for example, Facebook would learn that you all care a lot about what each other have to say.

Right now, the service is being tested out on 15 US college networks on Facebook, within Facebook’s own company network, and most recently on VentureBeat’s company network. At the moment, Facebook is expanding the test by letting credit possessors give credit to those without, and thereby letting them access the feature. It will be rolled out more if it shows itself to be having the intended effect; so far it’s doing well, Morganstern tells me. The company may also at some point offer a filter so you can see items that friends are crediting.

One can imagine the feature expanding in all sorts of directions — through Facebook Connect, for example. People who leave comments on VentureBeat using their Facebook identity could one day show how much they liked a post by giving it credits that show up in VentureBeat comments.