Facebook has for some time been focusing on getting its network into the hands of all Earthlings, be they tech sophisticates in urban centers or nomadic herdsmen in South Sudan.

“We want to give everyone in the world the power to share,” said Facebook CEO Mark Zuckerberg in the company’s quarterly earnings phone call today. “The big question for us is, which areas are growing the fastest? … Whatever the form factor is going forward, we’ll be able to deliver.”

This has meant a big push to put usable Facebook applications on all kinds of phones, including feature phones, and today we learned a bit about the payoff.

As part of its earnings presentation, Facebook rolled out a new statistic that shows how well it’s doing on this front. It said it’s got a grand total of 189 million “mobile-only monthly active users (MAUs),” a number that’s been on the rise for a while: 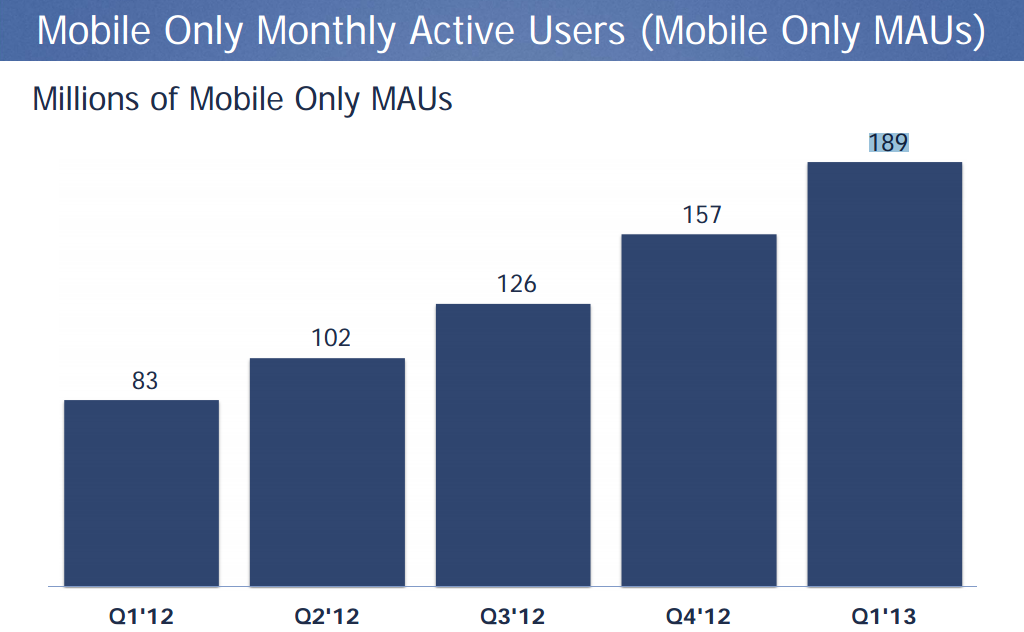 In all likelihood, if you go a full month as a Facebook user without touching Facebook.com on the desktop, it means one thing: You don’t have access to a desktop/laptop computer, and your phone is your sole connection to the web.

That means that nearly 200 million people are on Facebook every month without using a computer. These probably aren’t all super-hip young folks who are too cool for laptops; we’re likely also talking about people around the world who may never have access to desktop computers due to their prohibitive costs.

“Faebook really represents an opportunity to connect over 900 million people,” said engineering director Doug Purdy at the same event, “but we hope one day for it to be the entire world.”