There have been rumors that Facebook is planning some new music services. Here’s a screenshot of one of the services, Discography (click through to full screenshot).

It is apparently live and available for musicians or bands that want to market themselves by using Facebook’s “Pages” feature, or pages where advertisers feature their wares.

It is significant because it comes directly from Facebook, not from outside developers. One fear is that Facebook might market it at the expense of others, though its not clear yet whether this fear is justified. It’s true that a mass of third-party efforts could be effected: There are 318 third-party applications on Facebook that are experimenting with music in some way, listed by Facebook here.

The Facebook application says it helps let fans track the history of a band’s records, and see a listing of albums as well as the tracks. It can’t be used on normal profile pages.

Here’s what Facebook chief executive Mark Zuckerberg said about there being a level playing field for developers, at last month’s Web 2.0 conference:

“There may be something in ads. In the next few months there will be a lot more on that. We reserve the right to create anything and launch any application, but we want to work from a level playing field.”

Techcrunch has more on this issue, including screenshots of Facebook’s own 50 cent page, here, which has Facebook’s Discography and its other music-related applications called “Fans” and “Music Player.” 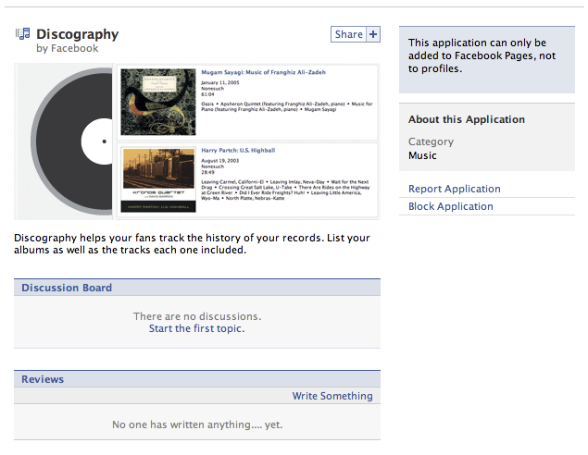