Meanwhile, Facebook has quickly grown to reach more than 140 million monthly active users worldwide, according to internal statistics published by the company. Outside analytics firms like comScore invariably show that Facebook’s worldwide traffic overtook MySpace’s this past year to become the largest social network in the world.

When Facebook launched its developer platform, it declared that it would offer a “level playing field” for third parties — which became a key factor in luring companies to embrace Facebook’s platform. “We reserve the right to build anything and compete with any of our applications,” said Zuckerberg at last year’s Web 2.0 conference in San Francisco. “But we intend to do it on equal footing and on fair ground. We have gone a long way with the applications we have now to not take advantage them.”

Zuckerberg, recently reiterated this point to me in an interview:

What we wanted to do was make the platform as neutral as possible — to open up a core set of services, a set of different ways to communicate, like news feeds and [application invite] requests. We wanted to make it so that all apps can do the same set of things.

But things have been complicated

The past year and a half have been a running battle between Facebook’s rule and technology changes and developers’ efforts to work with them — or around them.

Facebook has consistently given its own applications special advantages since the platform launched. Its own Photos application, which lets users upload and share photos, competes with a range of third-party apps that offer photo-sharing and other services. Since last fall, for example, Photos has been featured more prominently than rival apps in the company’s news feed. It shows you when friends have uploaded new photos that have nothing to do with you, for example — an action that Facebook doesn’t allow a third party to display in feeds. 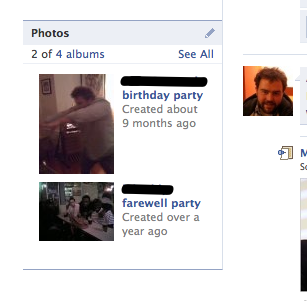 Tipping the playing field in favor of Photos is one small example of a platform rule change. The changes to the notifications, mentioned earlier, is another. Here are some other examples. After third parties began offering fan pages for musicians and other public figures last fall, Facebook came out with its own Pages. After third-party applications let you designate who your favorite friends were on your user profile, Facebook introduced that feature. Last month, after other applications began offering ways for users to be automatically notified about friends with upcoming birthdays, Facebook came out with its own feature to do that.

Facebook says developers just get more interested in building category-specific applications when it builds more core features for them to use — like the ones listed above. The company cites comments made publicly by developers of calender-notifications to prove this point, like this statement by Raj Lalwani of SocialCalendar, an app developer affected by the calendar feature change. Lalwani put on a brave face, but his conclusion was more ambivalent: “Constantly evolving, fortunately or unfortunately, is the only way to succeed as a startup in Silicon Valley.”

Privately, we’ve heard some of these calendar-app developers are saying things more along the lines of “time for us to work on other social network platforms.” Meanwhile, a Facebook representative replies that “if your entire business is built around a feature that Facebook can add as one radio button, it’s probably not the best business model.”

Of course, many third-party developers have also been breaking rules. By July, Facebook had disabled or forced rule compliance from more than 1,000 blatantly spammy or otherwise pernicious apps.

When the platform launched. Facebook had straightforward rules in place governing what apps could and couldn’t do, but it had no policy or process for dealing with infringers. Developers, ranging from venture-backed companies to college students in their dorm rooms, quickly figured out they could grow with impunity by using deceptive methods to get users to install apps. One of the more popular methods of deception was for an app to tell a user they had to invite friends to get started. The user’s friends would then receive an email with a link that, when clicked on, automatically installed the app on their profile page.