In the months after the launch, users’ profile pages became cluttered with apps that they hadn’t intended to put there in the first place. User anger began to mount.

Instead of taking direct action against the infringers, Facebook tried to combat them with technology, often disabling Platform features that had been exploited. For example, after apps gamed the news feeds to disproportionately show their users’ activity, Facebook drastically scaled back the ability for apps to appear in news feeds at all. It didn’t start taking direct action against perpetrators until March of 2008.

Because Facebook launched the platform with relatively few rules — and no experience being a platform company — the company’s ongoing changes are like “rebuilding an airplane in mid-flight,” says Mike Schroepfer, vice-president of engineering.

The wrong move risks sending the whole platform into a nosedive, the right move makes the plane go faster. 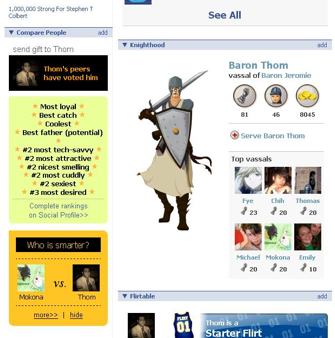 Facebook’s efforts to reshape its platform culminated in last summer’s redesign, which all but eliminated one of the most prominent features of the platform up to that point: The profile box for applications. That interface was a simple way to display an application, very similar to the simple widgets that had been on rival social networks like MySpace for years. Facebook disliked the concept because it didn’t promote information-sharing to the degree that its news feeds did. Developers that relied on the profile box to get traffic saw their numbers plummet as the redesign was implemented on the site over August and September.

Zuckerberg, on the redesigns impact on developers:

What we’ve found was that there was some confusion early on. We changed a number of things and iterated a lot after we launched to get things back to a point where baseline levels of [app] activity were the same as before. Apps are slightly less front and center now and somewhat out of the way, that’s fair.

But the company has been clear about its intentions since the platform launched, Zuckerberg says: “We didn’t see it as being a widget platform.”

This is small consolation to companies suffering big losses because of the near-elimination of such an important feature. “To call Facebook a ‘platform’ is an insult to the word platform,” says one developer who asked to remain anonymous. “Platforms are fundamentally supposed to be stable and reliable, and Facebook has been anything but.” In August, Slide vice president Keith Rabois told The New York Times that “no one wants to build something that just becomes a [research and development] company for Facebook.”

Facebook, meanwhile, says that the core application programming interfaces and canvas-page features of the platform have remained stable. It frames the redesign as refocusing the site on user activity streams (the news feeds, the profile feeds, etc.). The redesign has so far been one of the starkest instances of Facebook choosing innovation over stability.

Even as the redesign hid third-party apps, Facebook continued to feature its own. Photos, for example, still automatically shows up on every users’ main profile page — users have to add third-party apps manually to the main profile page, and even then they can only add a few. In fairness, Photos has been a core Facebook feature since before the platform launched. The example nevertheless shows that Facebook cherry-picks areas where it exclusively promotes its own features. Facebook’s argument for doing so is basically that its apps offer core forms of communication, so they need special prominence.

The Photos app is illustrative of how the company makes product decisions, says Schroepfer. He joined the company this summer from Mozilla, the nonprofit that builds the open-source Firefox web browser — also a platform for third-party developers. When Facebook launched in 2004, it originally offered only profile photos, but users kept uploading so many photos that it began offering a more general photo-sharing service, Shroepfer explains. It’s now the largest photo-sharing service in the world and a key way that users interact with the site.

Facebook’s overall goal is to help people share information with each other more easily. User data and user interactions form the center of Facebook’s value. In Facebook’s view, farming out such services to third parties risks making Facebook irrelevant and destroys the cohesiveness of the user experience on the site.